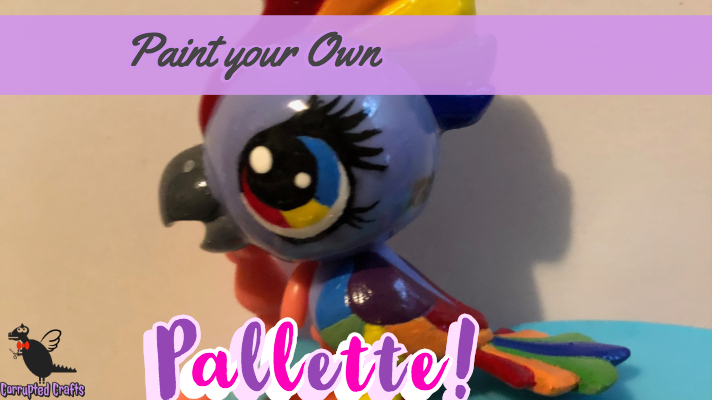 These newer LPS aren’t always as nice as the older versions, but with some paint work they can be pretty awesome. This LPS Bird was given a new life and her new name is Pallette, because of her bright, vibrant colors similar to a paint pallet. She was slightly difficult to paint simply because of how many colors she has.

Coming up with a Design for the LPS bird 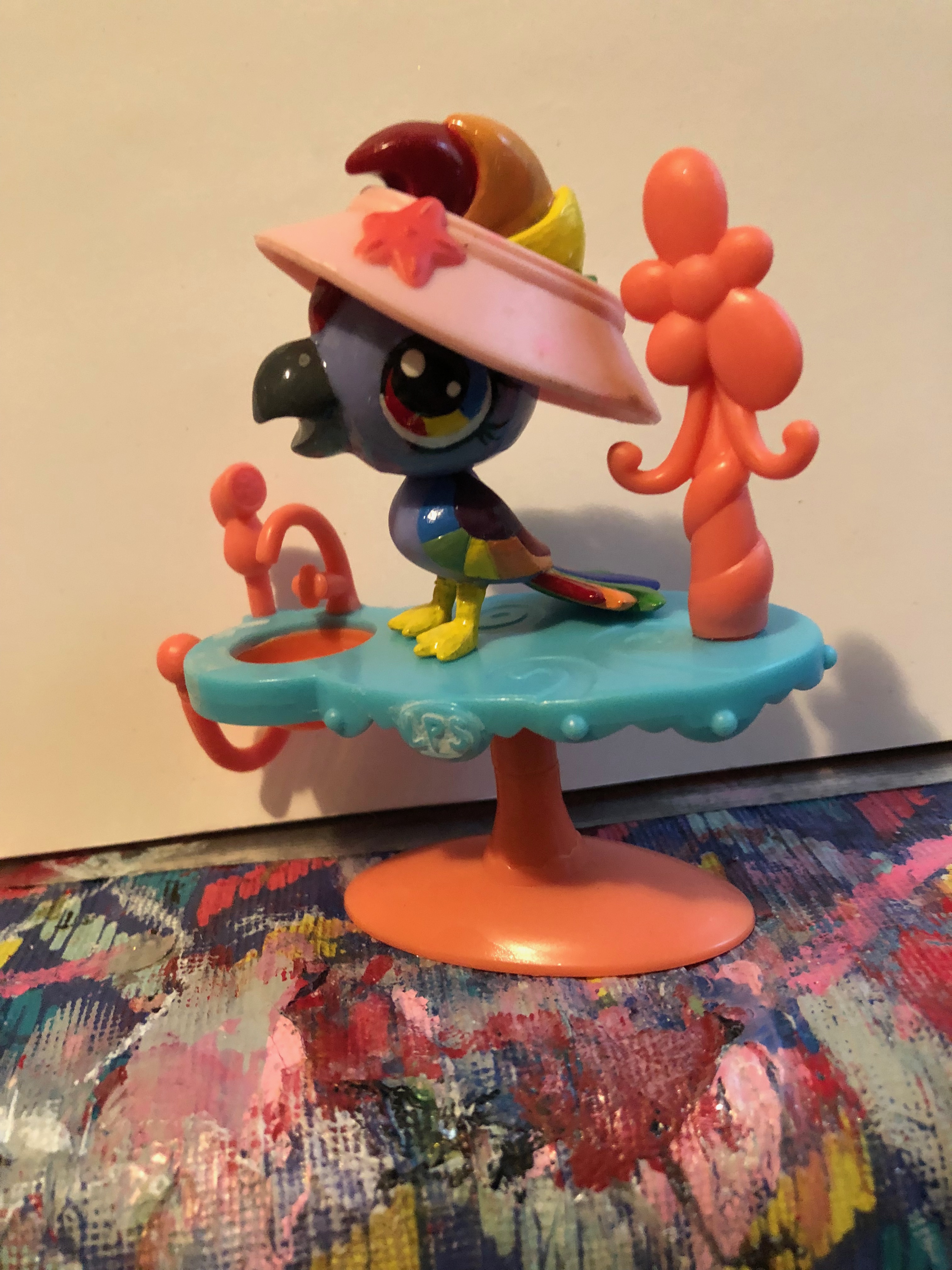 Even if your final design does not match what you wanted to begin with, always have a base plan for your LPS, in case you want to save some of the paint or reuse the base color of the plastic. I chose to keep the purple color and decided that gold mohawk needed to go desperately. The eyes were cool, and I knew they would look good on a rainbow bird, so I covered them with bits of tape to protect them.

Cleaning up the LPS Bird 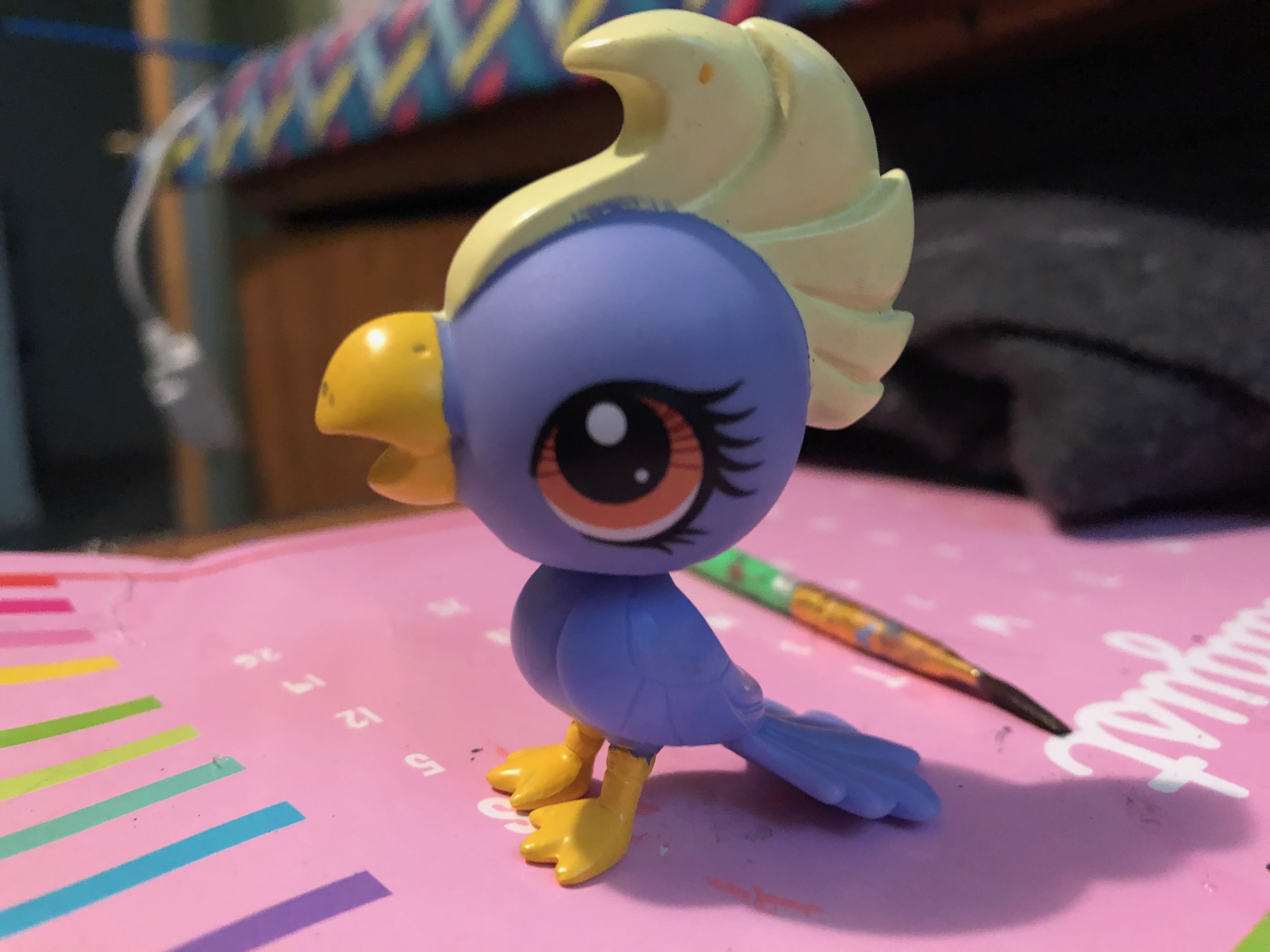 Use Acetone to get rid of paint in places you don’t want. Pallette had a super thick layer of paint on her beak, mohawk, and feet, so that went at once. Once that awful base color was removed, I peeled off the tape over the eyes to find that one eye was prefect… but one had gotten ruined. Be careful of dripping Acetone… I scrubbed the rest of the paint off the eye and got rid of any streaks of paint left over.

Picking out the Colors 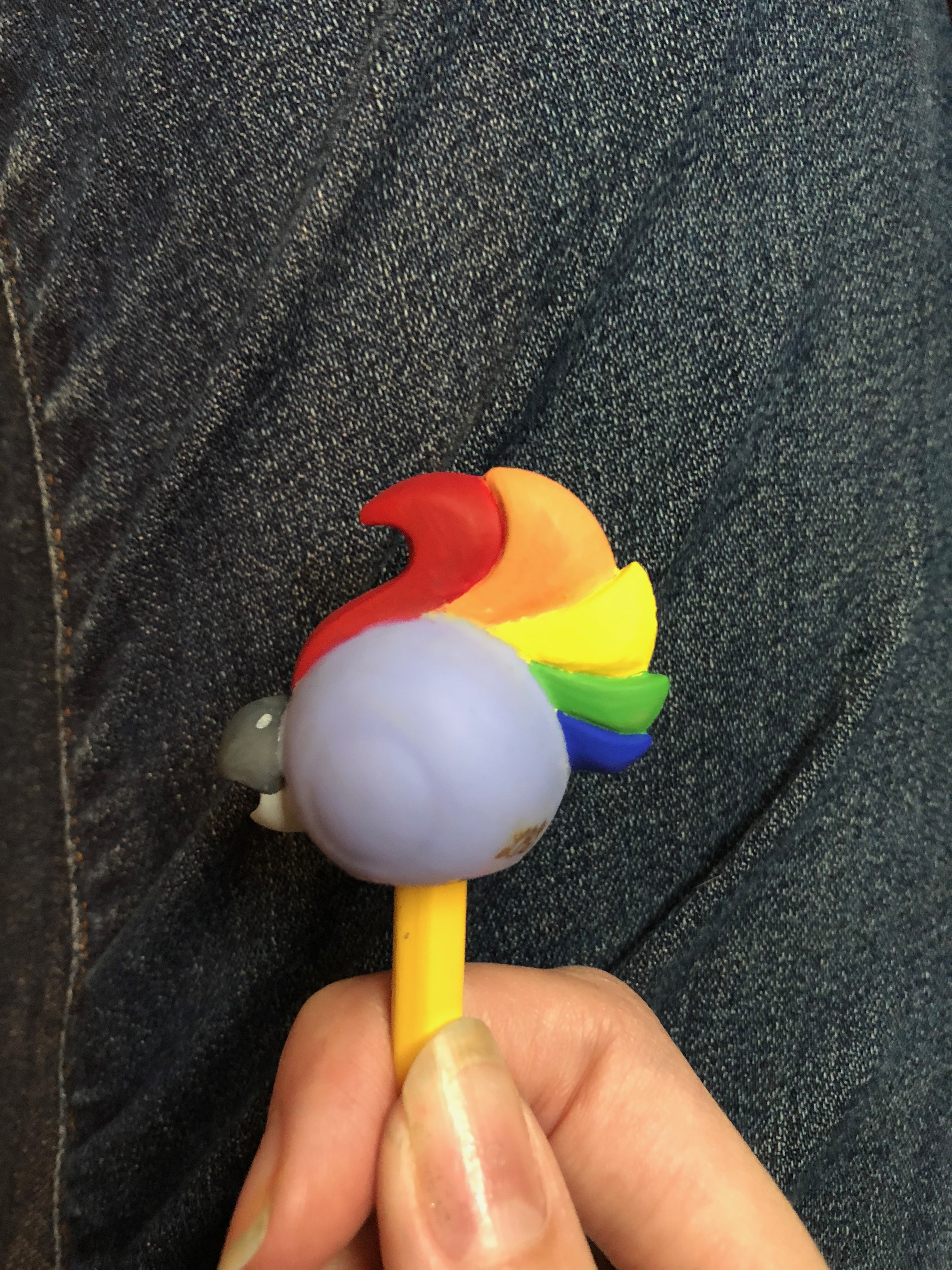 I chose a nice dark red and a yellow to start. I also chose a light and a dark blue and mixed my own green.

Taking the Head off of the LPS Bird

This is where things get a little cruel. Pop the head off the LPS and put it on a pencil. This will make it much easier to paint and clear coat later, especially considering the point of keeping some of the original color.

If you can’t get all of the paint off of the mohawk, coat it with a white coat of paint. If you want to make your own primer, mix the white with a little clear glue and cover it all over the mohawk, not worrying about it being fully opaque. Only do this on the mohawk and beak at most. For the beak, I did a dark grey on the top and a light grey on the bottom, painting the inside of the mouth neatly.

Painting on the Red of the LPS Bird 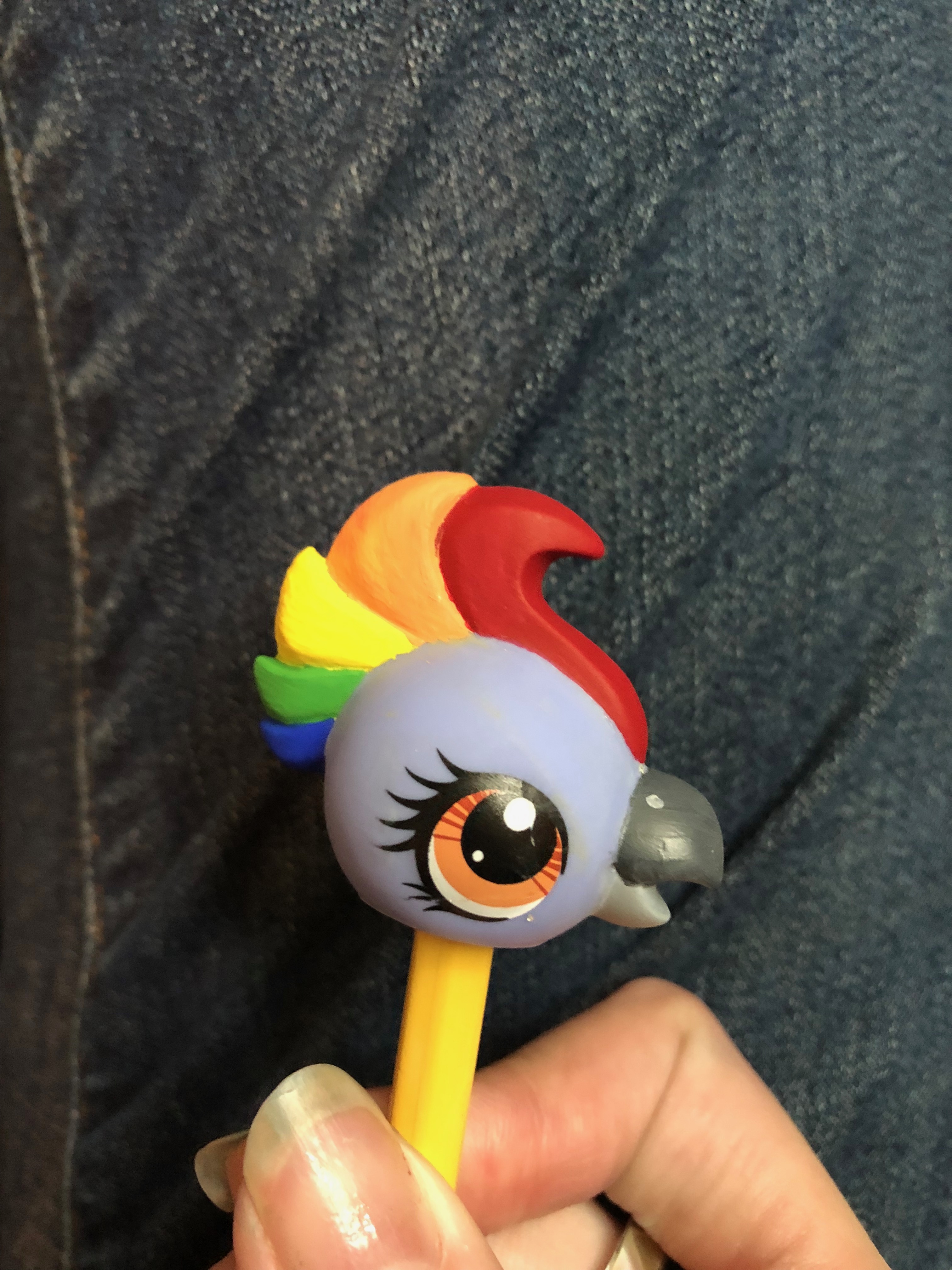 I started painting by painting the first mohawk part with pure red. This took two coats. Be careful not to get paint on the purple plastic we are leaving uncovered. Use a toothpick to scrape off extra paint before it dries.

Painting the Yellow and Orange

These two colors were the meanest of the bunch. Mix a tiny bit of red with yellow to make a light, vibrant orange. Paint on about five coats with a little tiny brush to ensure the color is completely solid. Paint a yellow coat on carefully, being careful not to color outside of the designated spot on the mohawk. This will also take an unreasonable amount of coats, so be patient.

Painting the Green and Blue

I chose the dark blue for the very last color on the mohawk, more of a tardis blue, and an Oscar the Grouch green for the piece between blue and yellow. The green took about three coats and the blue only took one. Be careful to watch where you paint, especially with dark paints that may dye the plastic. 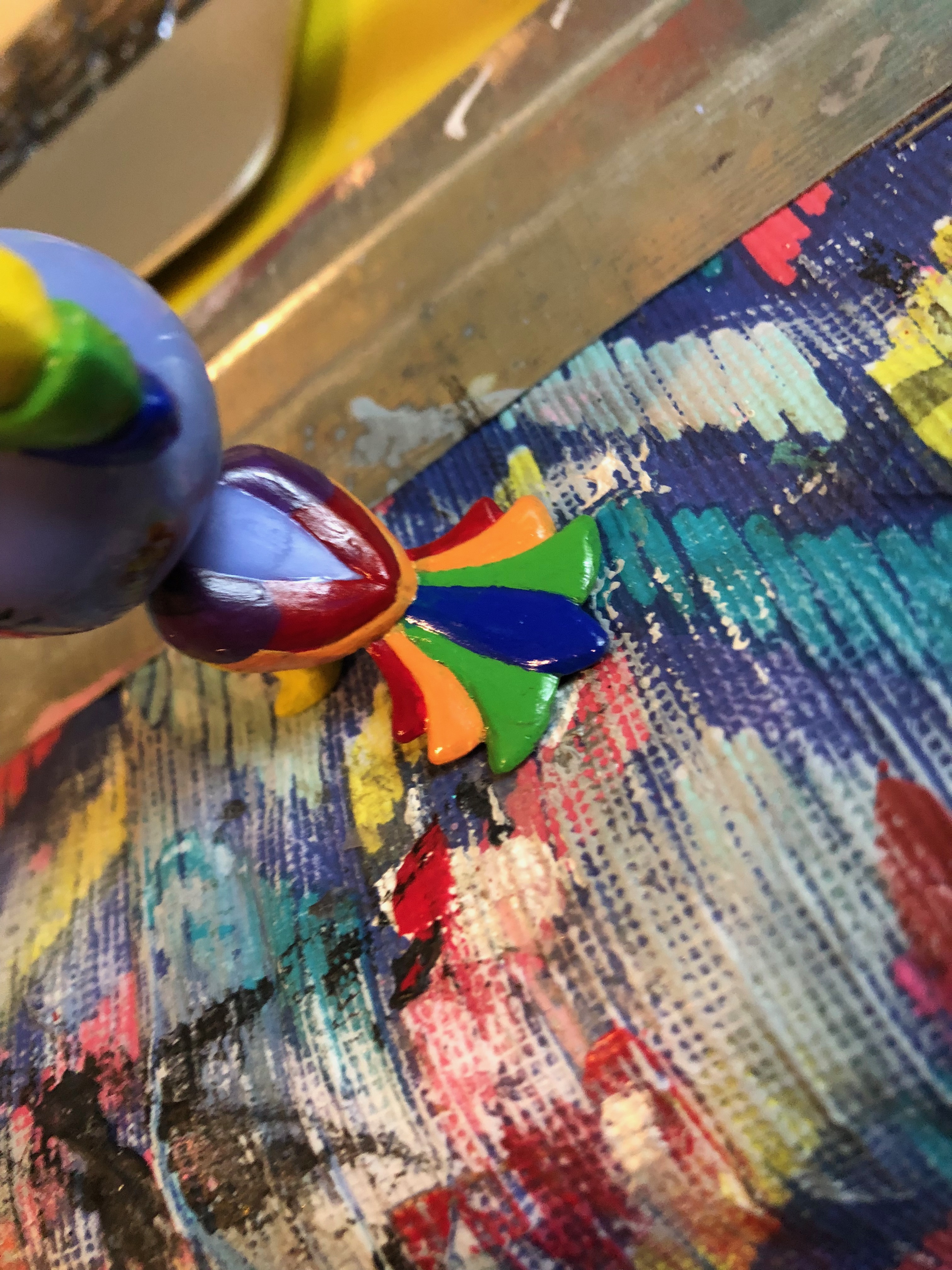 Matching the Wings to the Tail 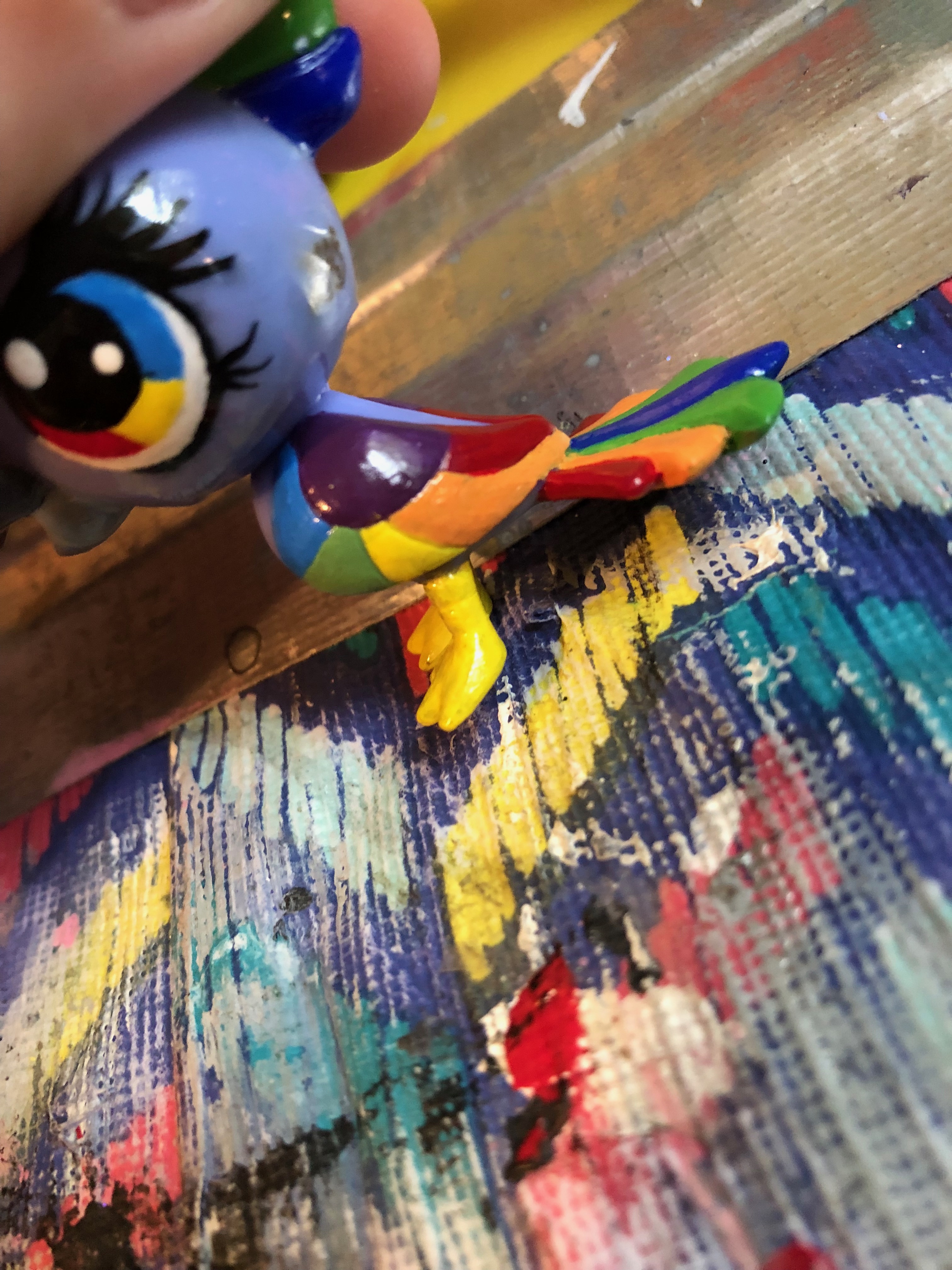 Now the red goes on the very tip of the wings, orange below the red, yellow behind the orange, green behind the yellow, and a light blue towards the front. This specific bird has sectioned flight feathers, which made it super easy to know what parts to paint. I did a dark purple on the back of the wing, to sort of go with the bird’s normal purple color while also making the wing stand out instead of looking like a ring of color.

Applying the Base for the Eye of the LPS Bird 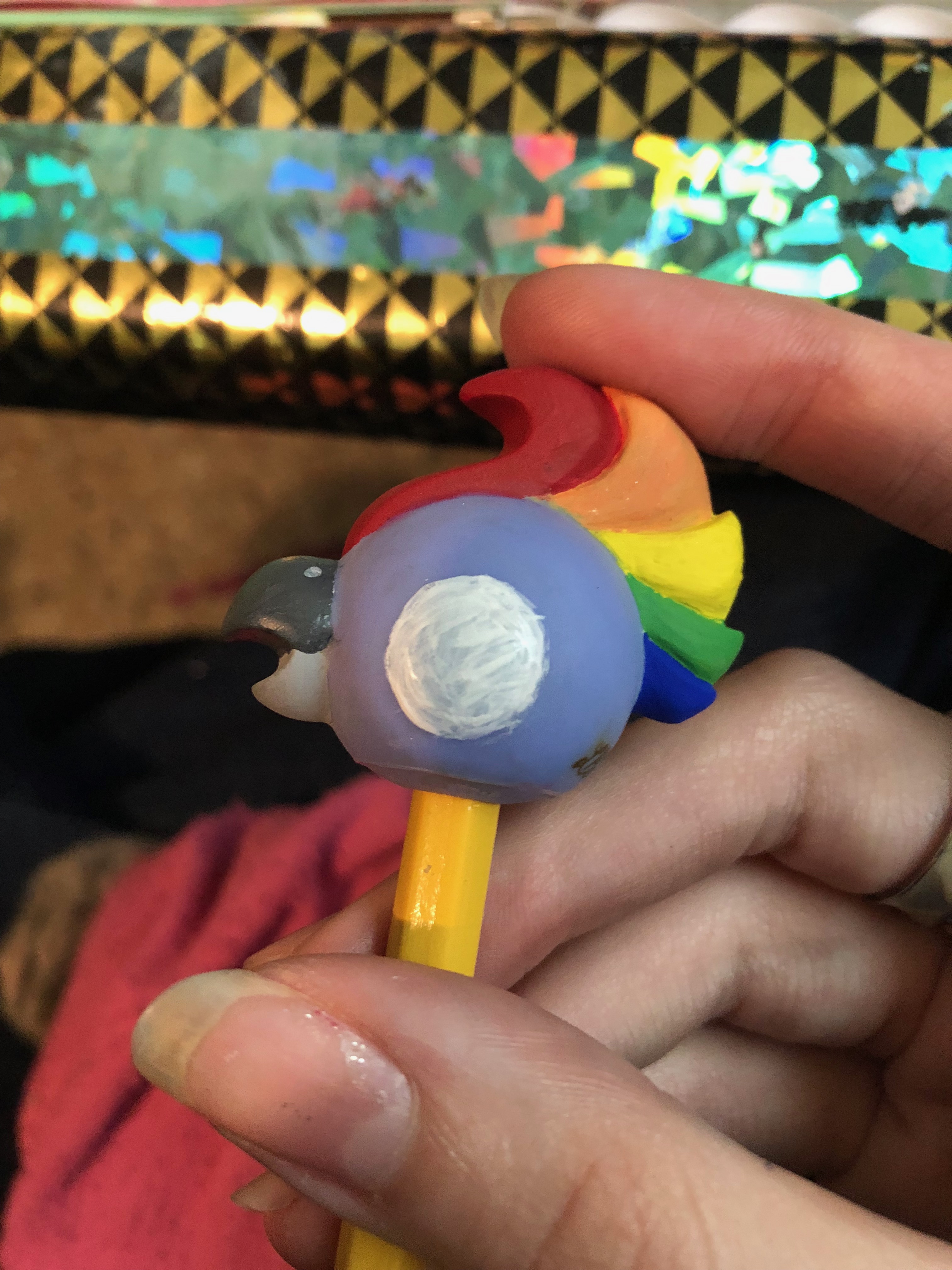 Since one of the eyes died, I decided to make it a rainbow of the primary colors. She is an artist, after all. Start by painting a white base coat and painting as many as needed for full opacity. It should be just a little smaller than the other eye, since we will be putting eyelashes on her. 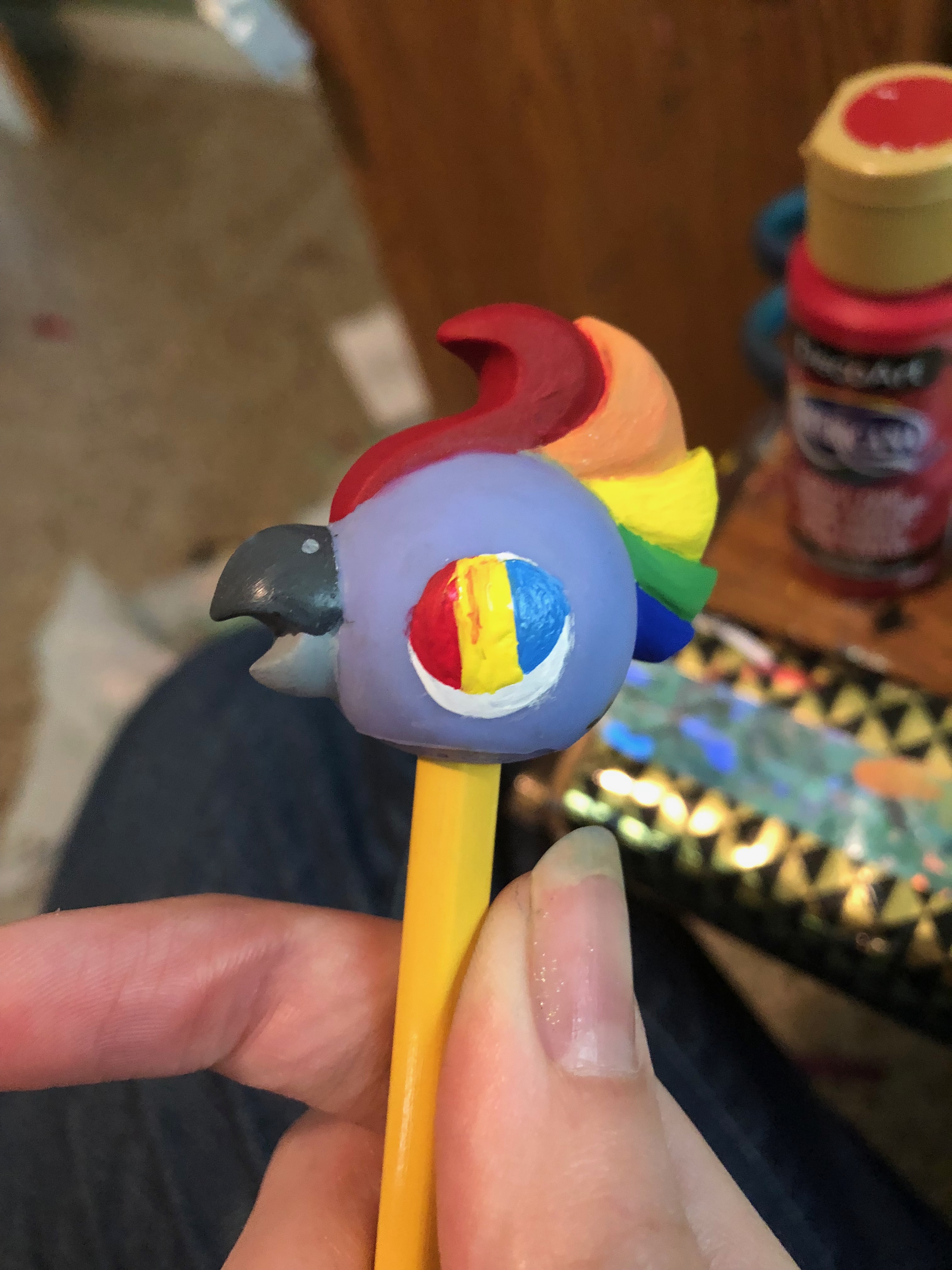 Next, add stripes of red, yellow, and light blue to the eye as shown in the picture. Put black over the color in the same spot as the pupil of the other eye. Add white spots to the eyes, one small and one big, on the eye just like the eye that was not damaged by Acetone. 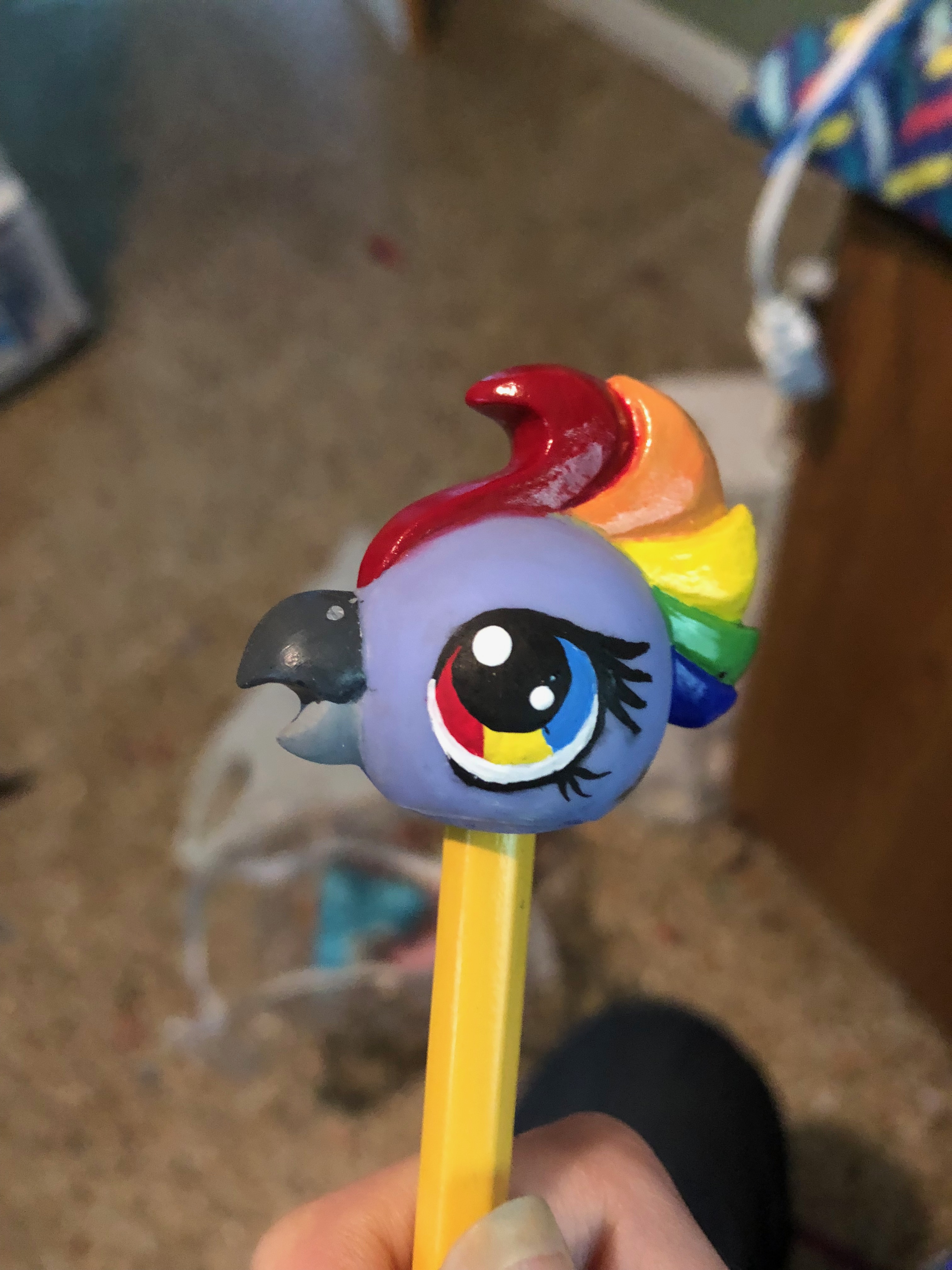 Add the same eyeliner and mascara as is on the other eye. Make the lines nice and thin, with a little space in the front without any eyeliner. Make about seven eyelashes, four on top and three on bottom, making them fairly small and lashy.

Add a clear coat to the eye, the mohawk, the tail, wings, and feet. Do not varnish around the neck of the bird, as this will limit its mobility. 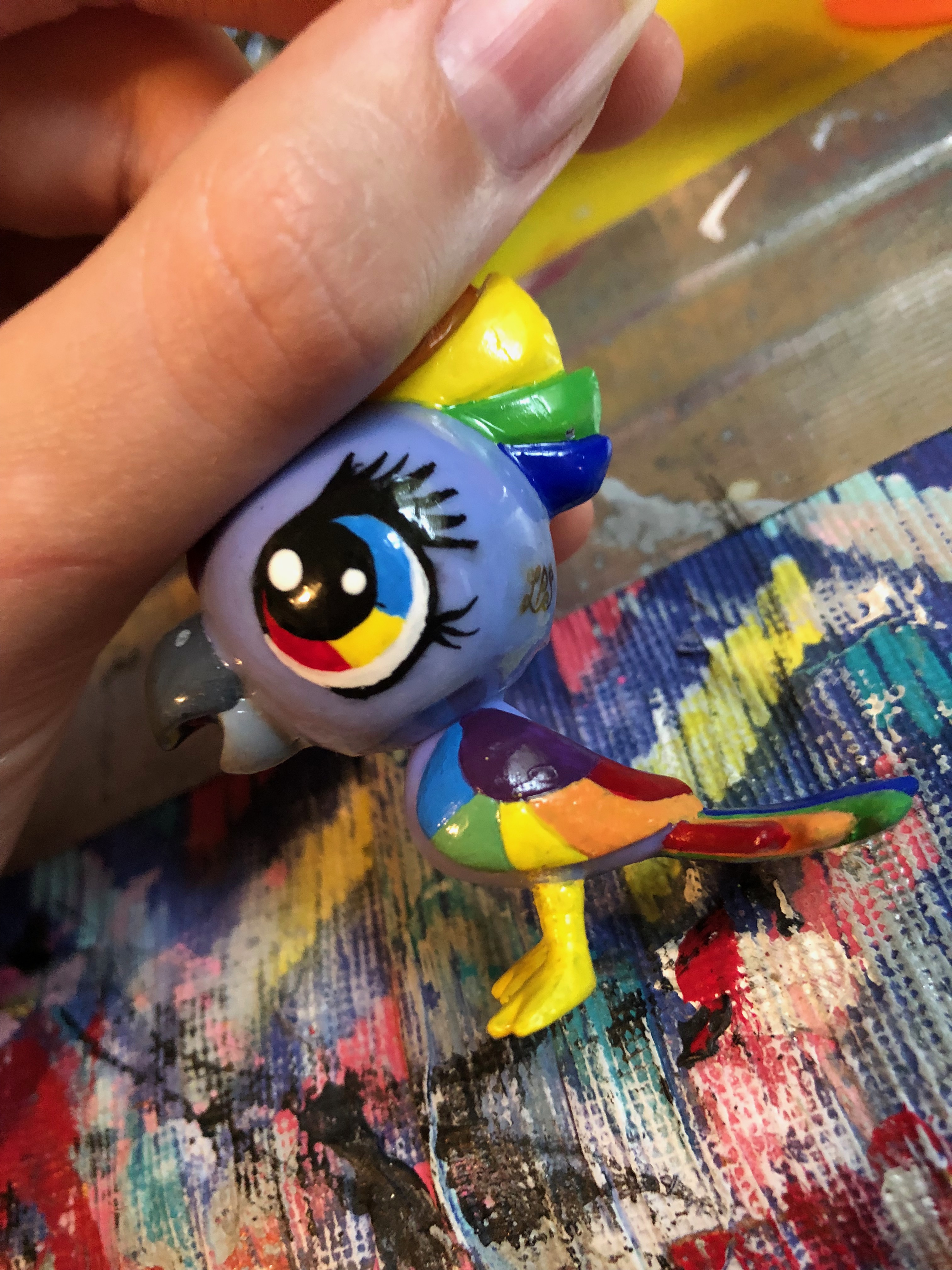 Take the head on a stick outside and spray it from a decent distance to cover the head in a glaze. This will keep the paint safe. After a good chunk of time has passed, clear coat the head with hard as nails polish, and let it sit overnight. 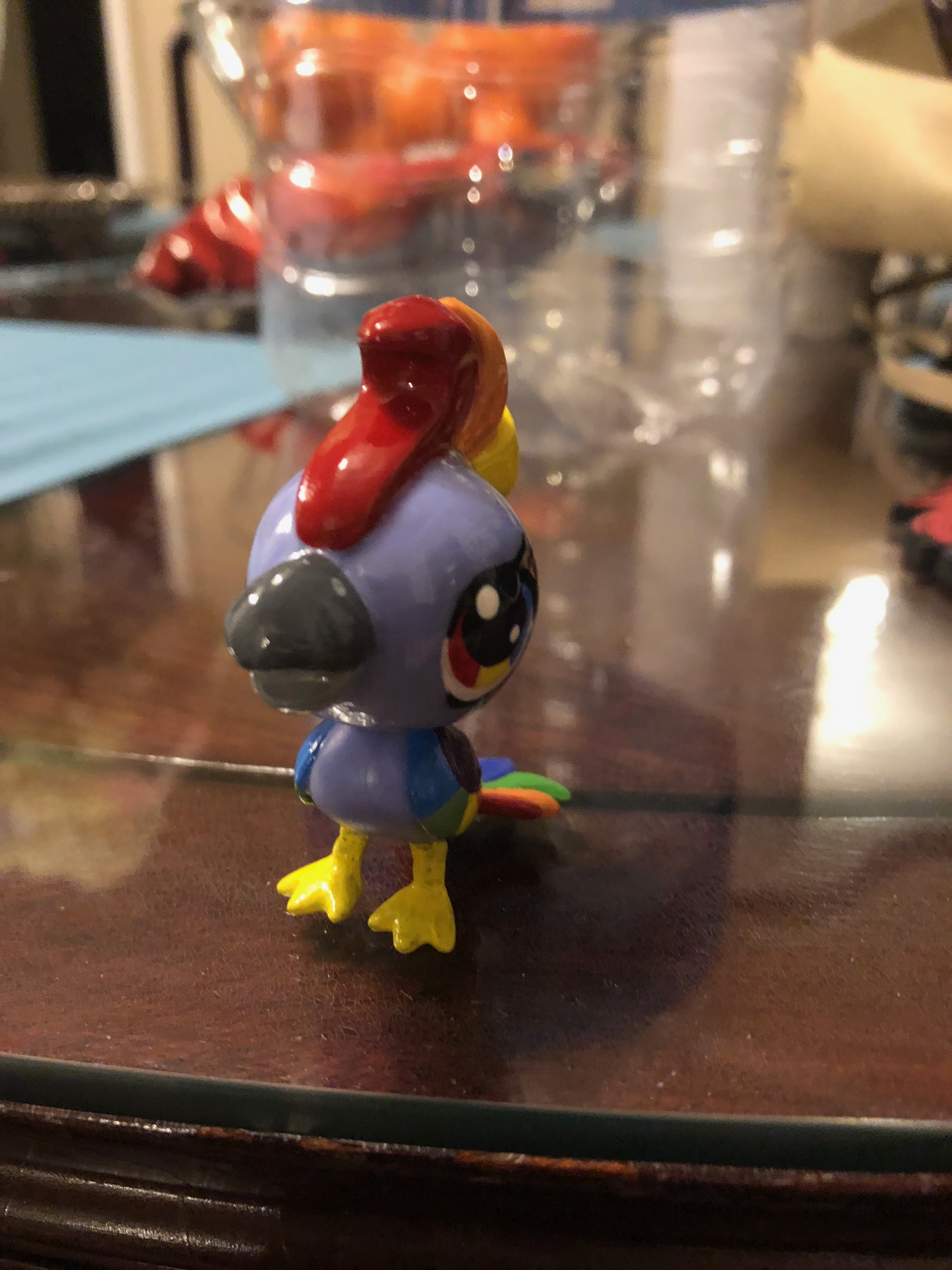 Pop the head onto the body. Since the body was not clear coated, the head will still move freely, or as least as much as it could before. 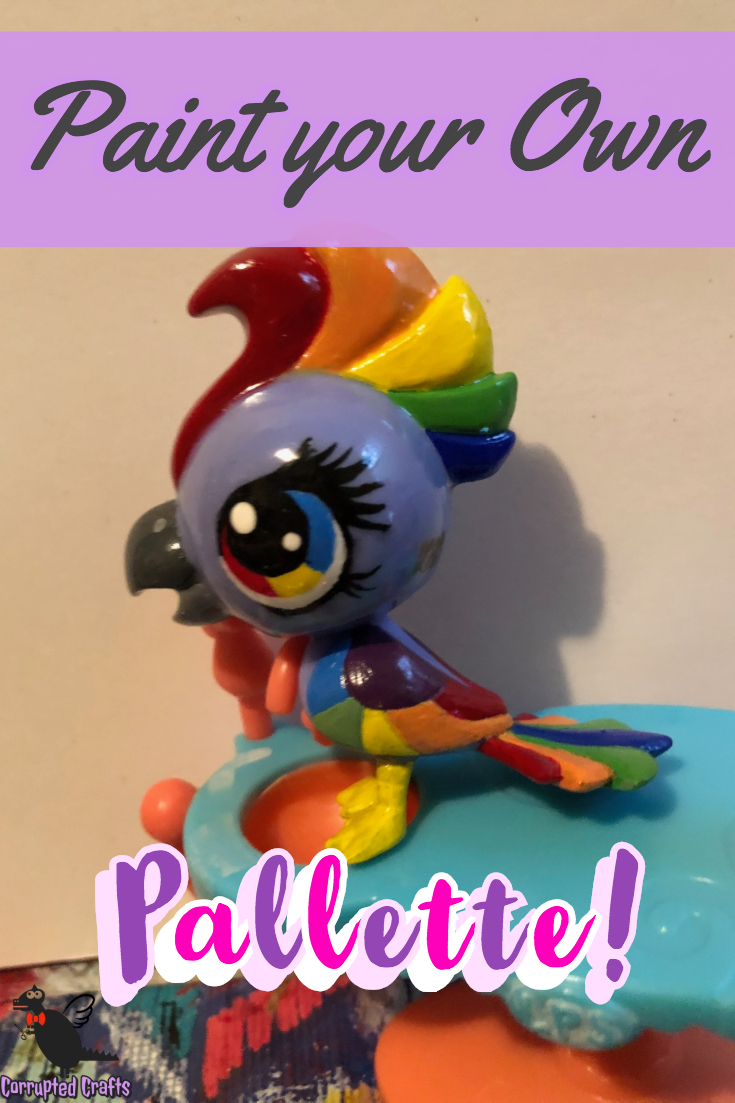