The Best Sweet Pickle Recipe on the Internet 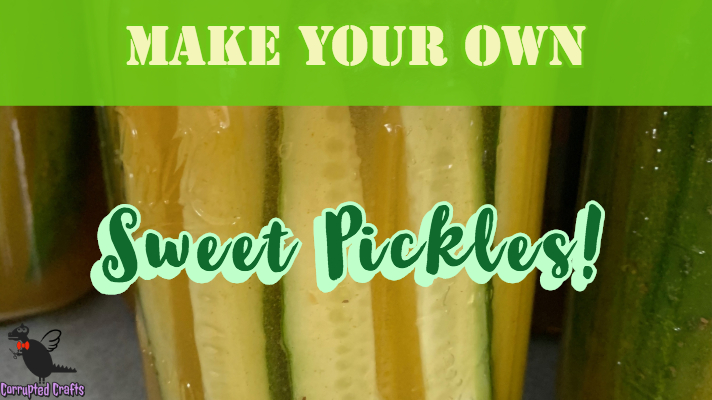 Sweet Pickles are awesome, but it seems like every store bought brand of sweet pickle is either too sweet or has funky aftertastes. But for 20-30 dollars worth of supplies and about an hour of your time, you can have your own sweet pickles. Pickling is super fun and easy, and this recipe makes eight full quarts of pickles, with a cucumber left over for nomming purposes.

How to Wash the Jars for Sweet Pickles

Jars are not something you can just send through the dishwasher, due to the wax seals on the jar lids that can be destroyed. Instead, fill the sink with hot soapy water and put the jars and lids in it for about five minutes to soak. Scrub the jars and rinse in cold water, then dry them extremely well. Any water at all can ruin the recipe.

Washing the Cucumbers for Sweet Pickles 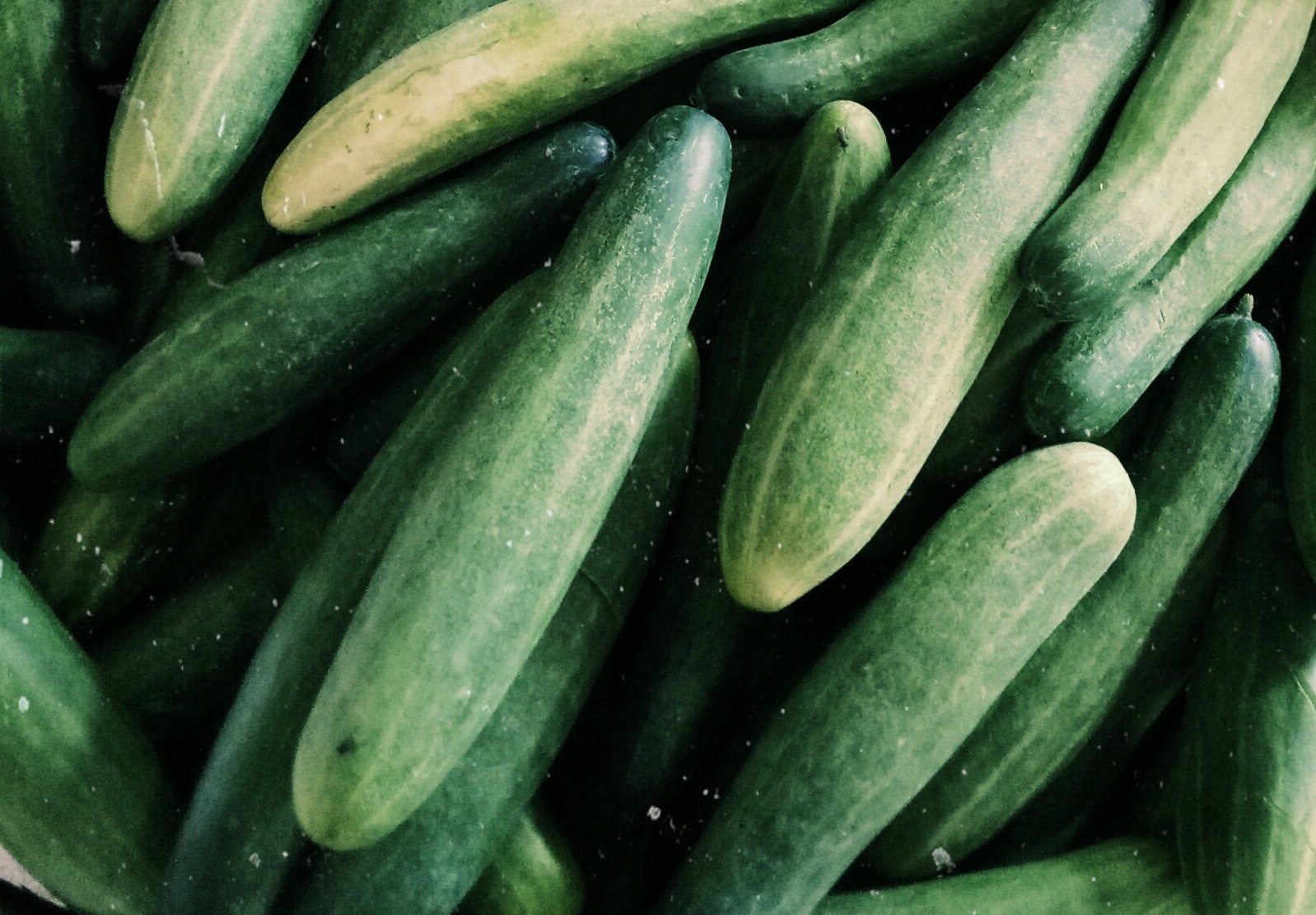 Wash all the cucumbers and make sure any flowers, dirt, and stems are removed. Use a wax and pesticide remover if you got them from a supermarket, because wax will also ruin your pickles and they will be gross and sad. Use a clean dish rag to dry off the cucumbers, because once again water will make gross pickles. 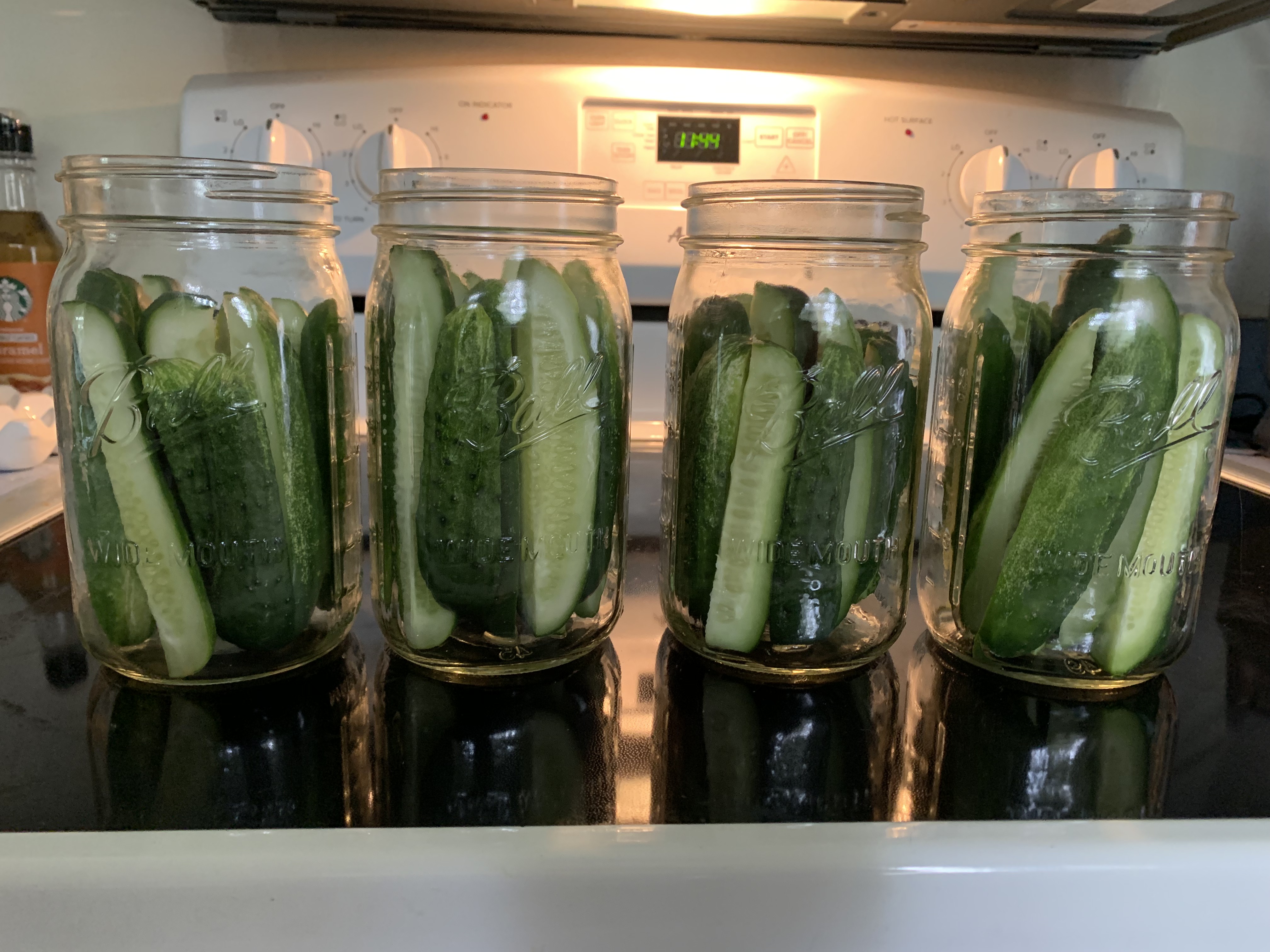 Slice the cucumber into fourths, the long way. Jam the cucumbers into the jars, as many to a jar as you can. The pickles only need a little wiggle room for the brine, so stack them vertically and really squish them in there. 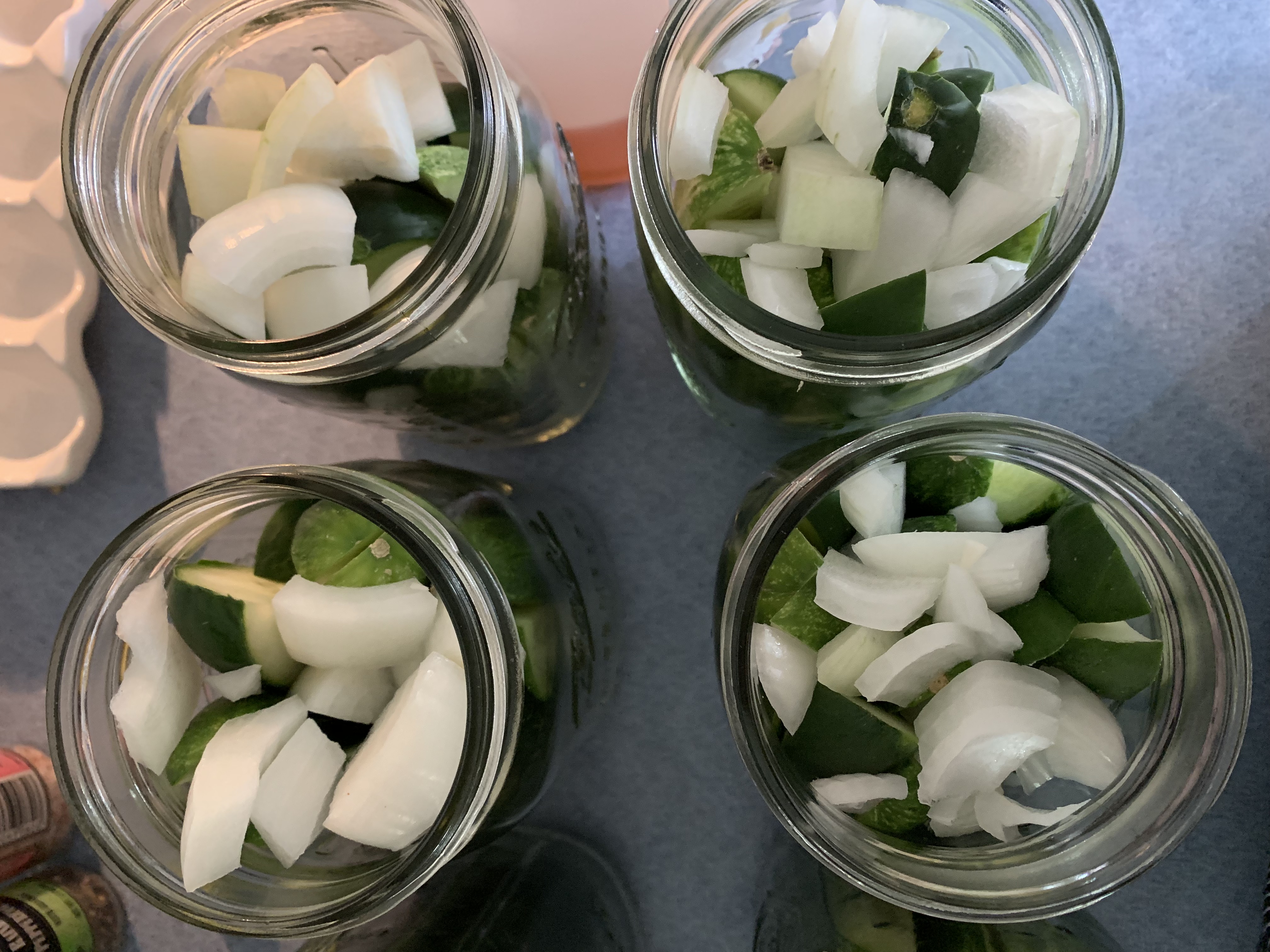 Chop up the onion after washing and peeling it, and distribute it among all of the jars somewhat evenly. Most recipes say to mix it into the brine, but this will ruin the recipe because the onions will not be evenly distributed. Add the garlic to the tops of the jars evenly unless you have squeeze garlic, which can be found at your local Publix around the fresh fruits and vegetables.

Dump the ten cups of sugar into a big metal pot, and pour the apple cider vinegar over it. If you have squeeze garlic, add it to the brine. If not, it should already be in the jars with the onions and pickles. Add the kosher salt, turmeric, mustard seed, celery seed, and alum. Whisk the mixture together until the grittiness is mostly gone, but there will always be a sugary residue at the bottom. It should be pretty clear with no chunks. 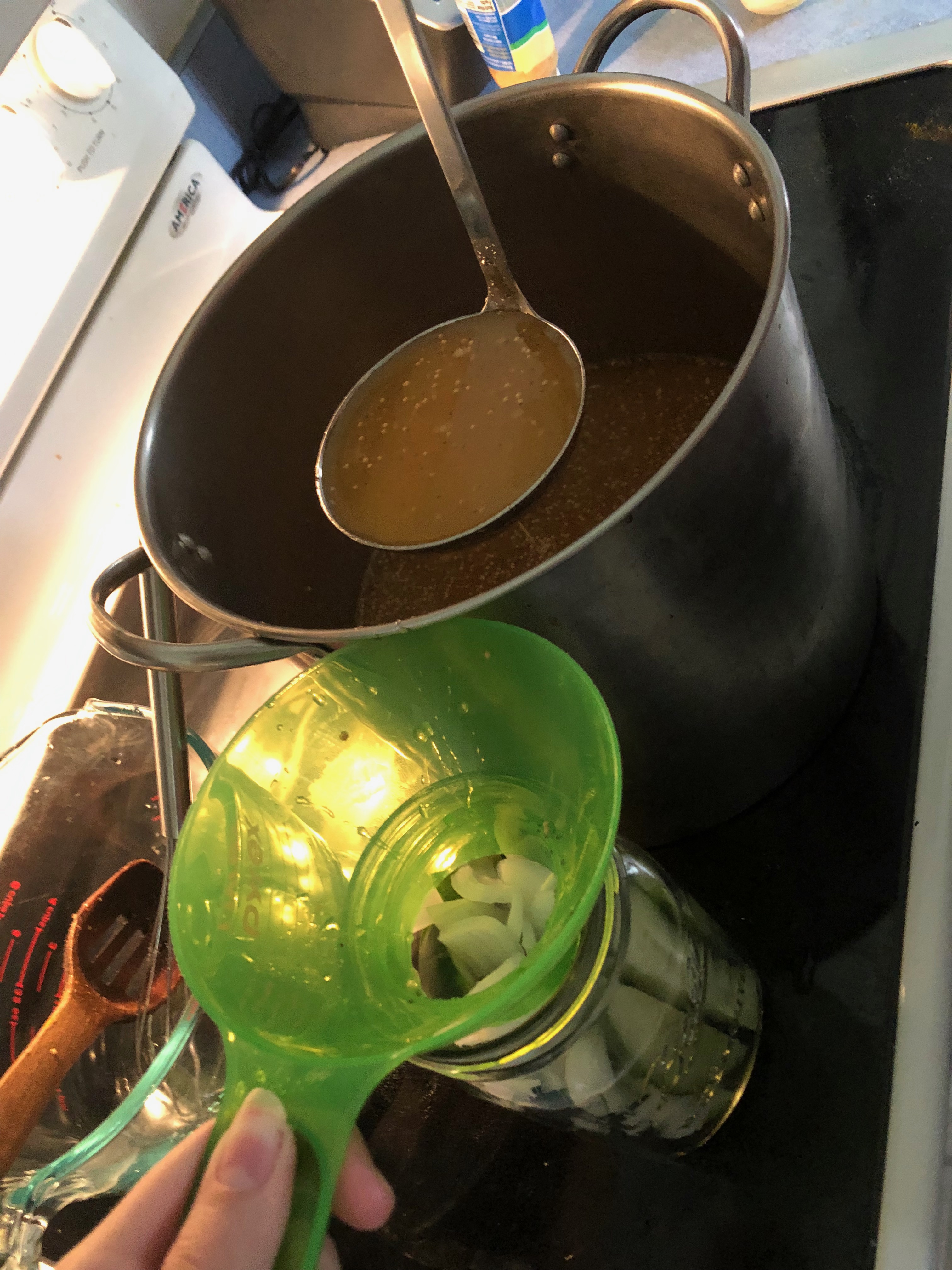 Using a ladle, fill all the jars with the brine up to about half an inch from the top, or to the bottom of the part the lid screws on. The brine should be just enough to fill every jar perfectly.

Turning the Jars of Sweet Pickles 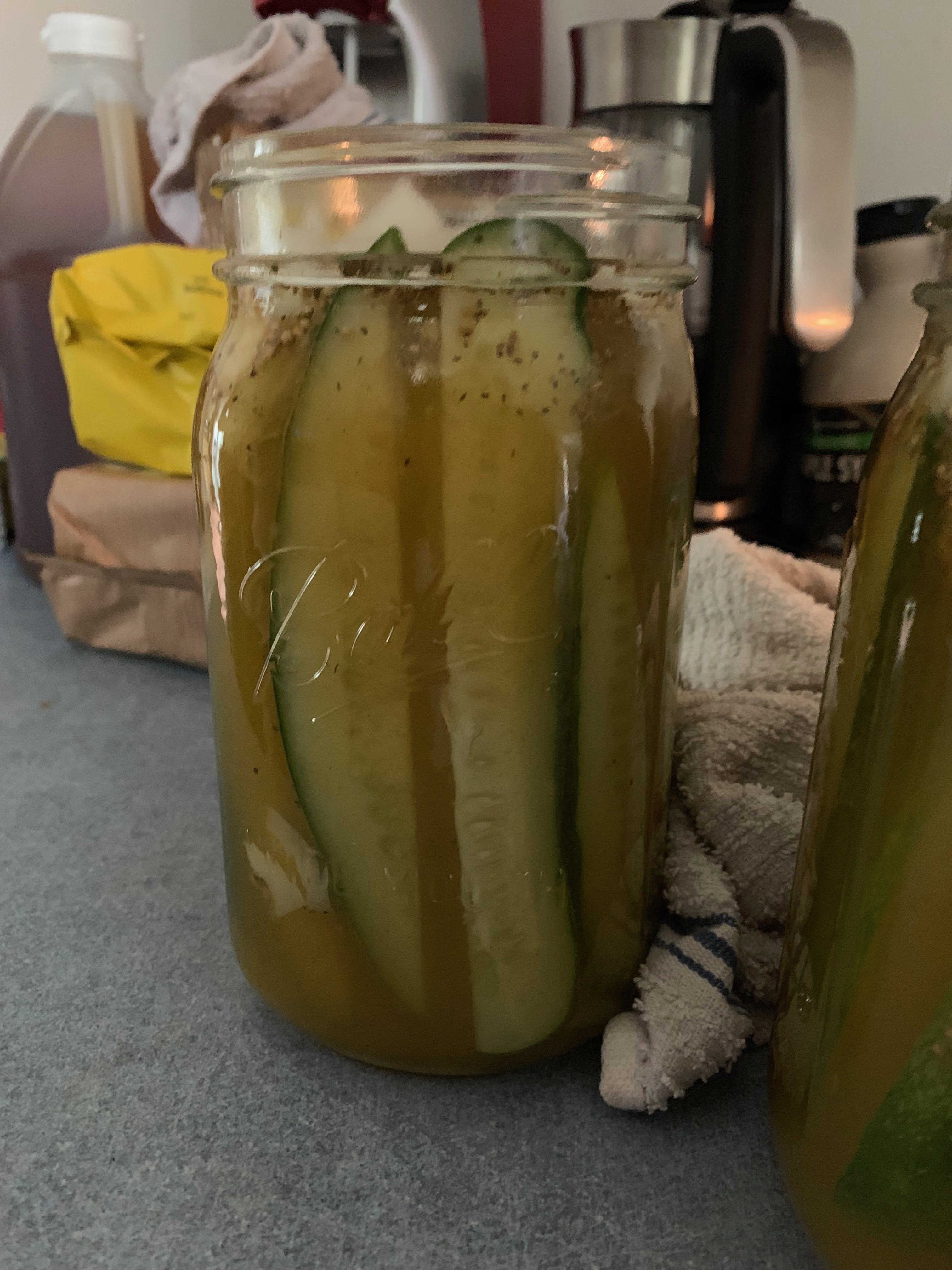 The thing about pickling is it takes time. Every day the pickles need to be shaken and turned over to keep the juices flowing and keep the stuff from separating. The pickles can be eaten after three days, but they are best after two weeks. They should be turned from one to three times a day. You can take the time to shake it properly, but we just flip them from bottom to lid and back and move on. 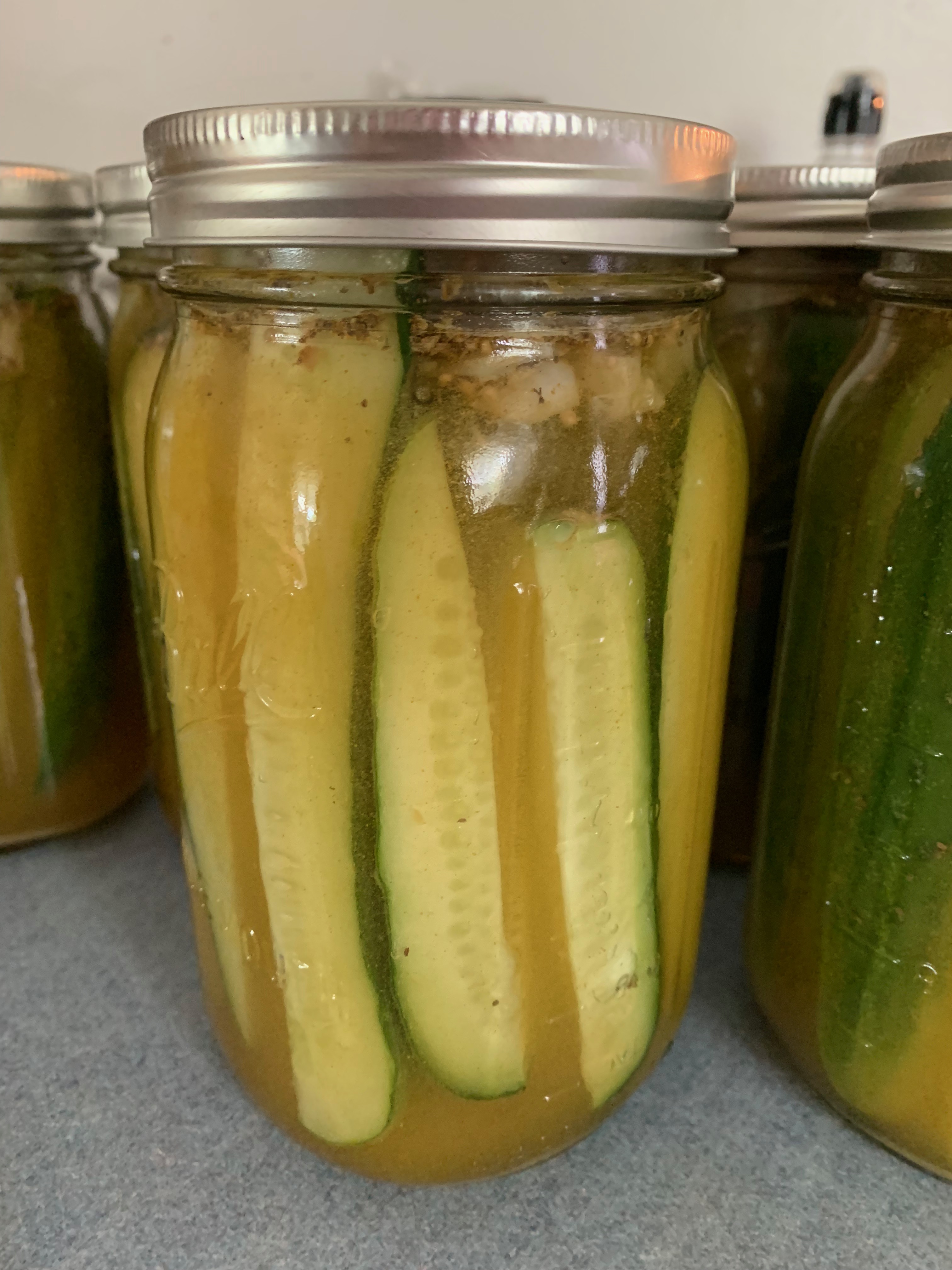 Once you’re done shaking them and taste them to make sure they are good, you can store them in your fridge or in your pantry. They will last about a year in the jars without sealing them using the canning method with boiling water. 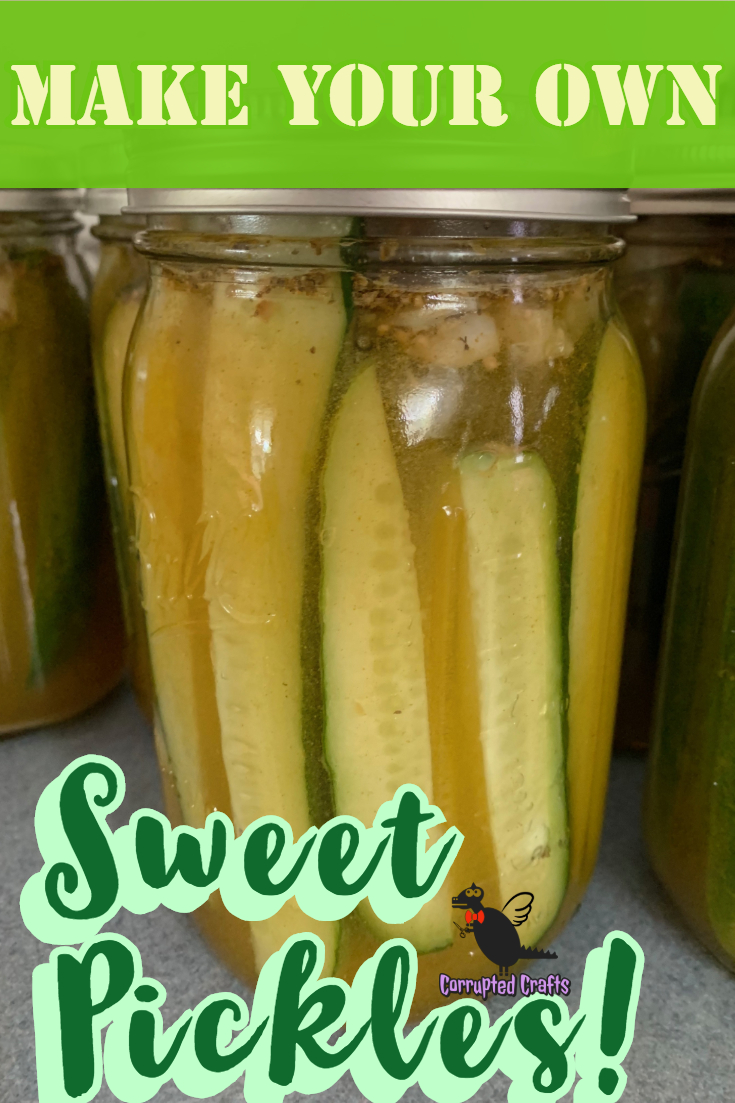 You now have enough pickles to feed your whole family. Happy Crafting!