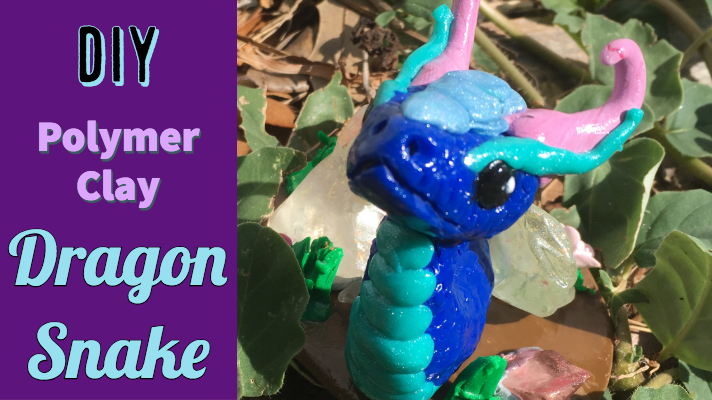 Have you ever seen a snake as cute as this one? This little guy took about two hours to sculpt from start to finish, and he is simply magical. This tutorial will show you how to make this little Polymer clay dragon snake as easily as possible. 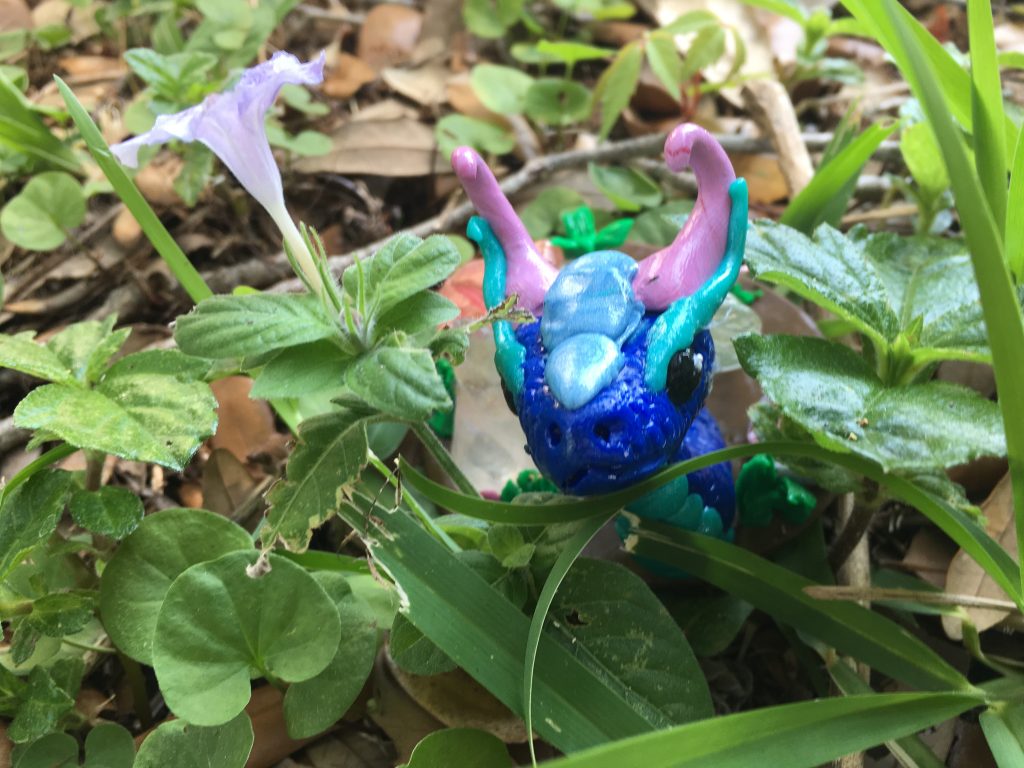 Start by picking out four colors that go together, preferably one base color that stands out against the other colors. I chose dark blue, light blue, turquoise, and also a metallic blue.

Step 2: Cut a Piece off and Sculpt 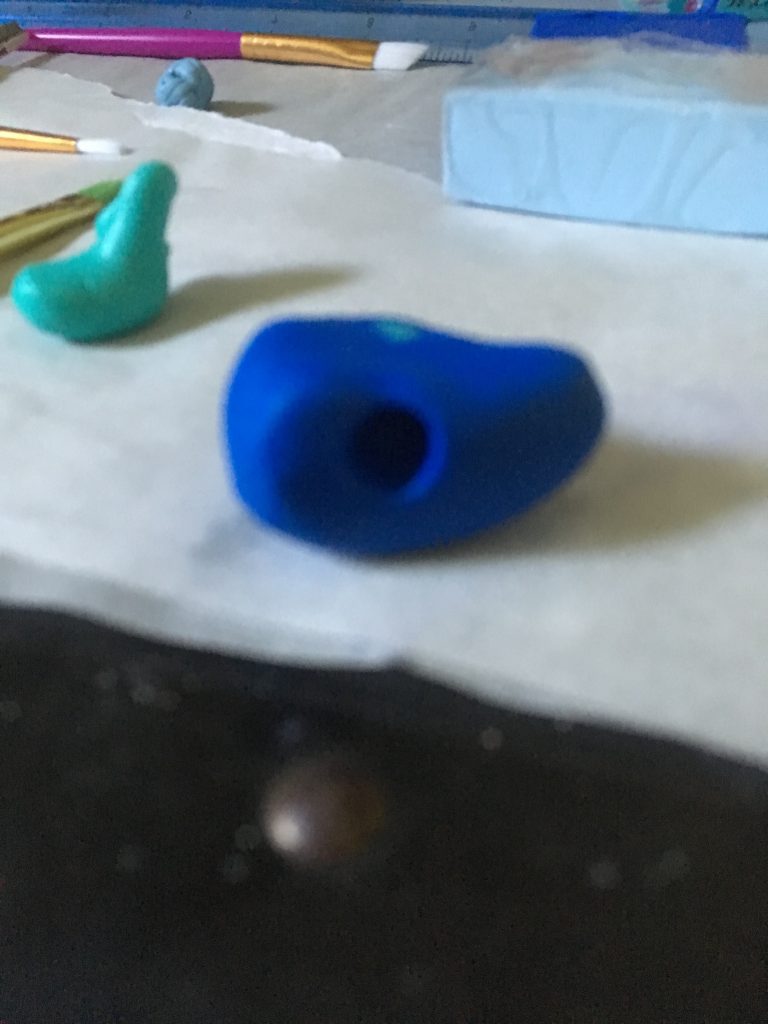 Cut a piece of dark blue clay, about a fourth of the block, and knead it on your hands. Once kneaded, shape it into a very rounded triangle. Round the back of the head as much as you can.

Step 3: Poking eye Sockets on the head of your Polymer Clay Dragon Snake 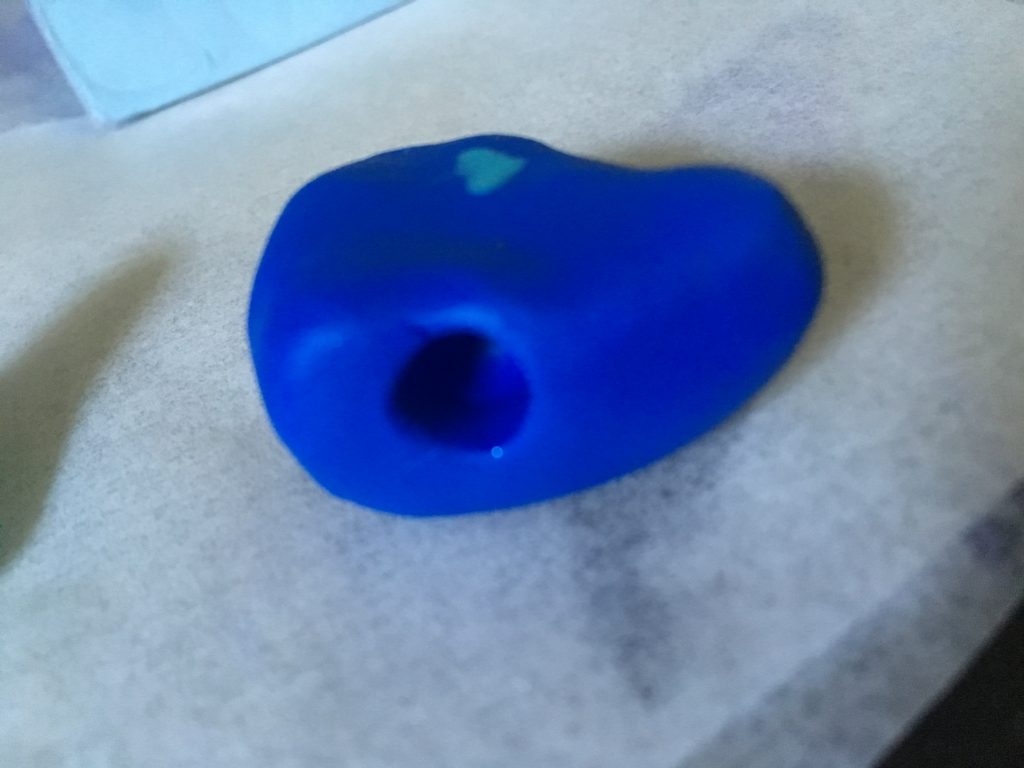 Using a large dotting tool or the end of a paint brush, gently push in two eye sockets on either side of the head. Look down the middle of the nose to make sure they are as even as possible. 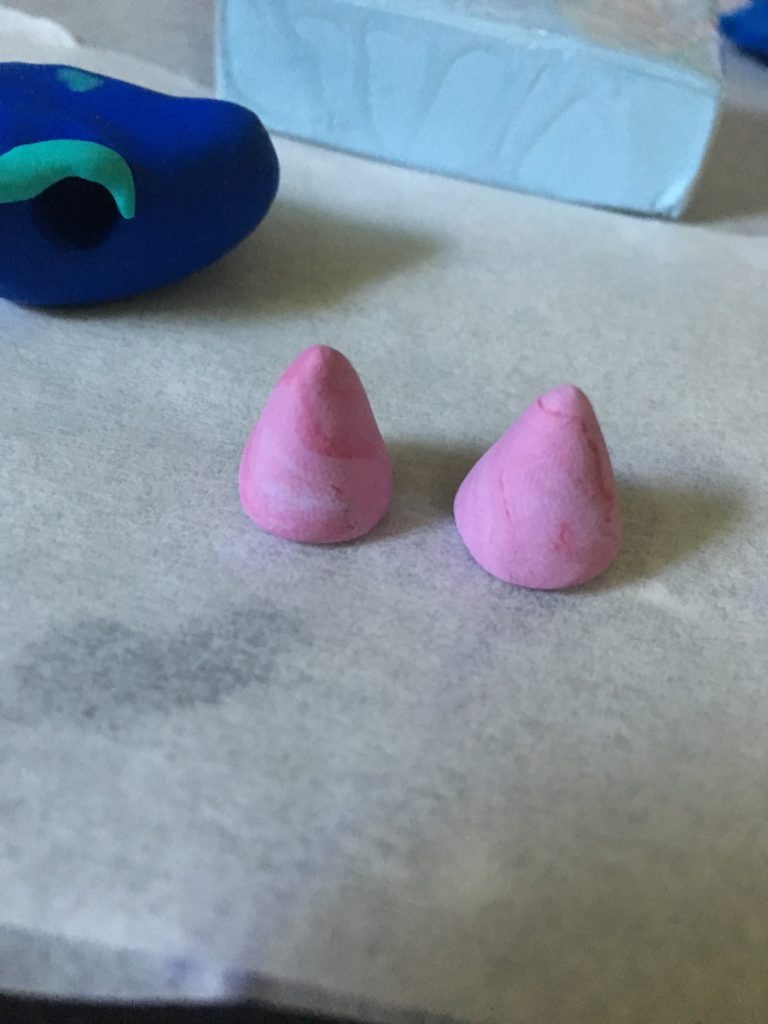 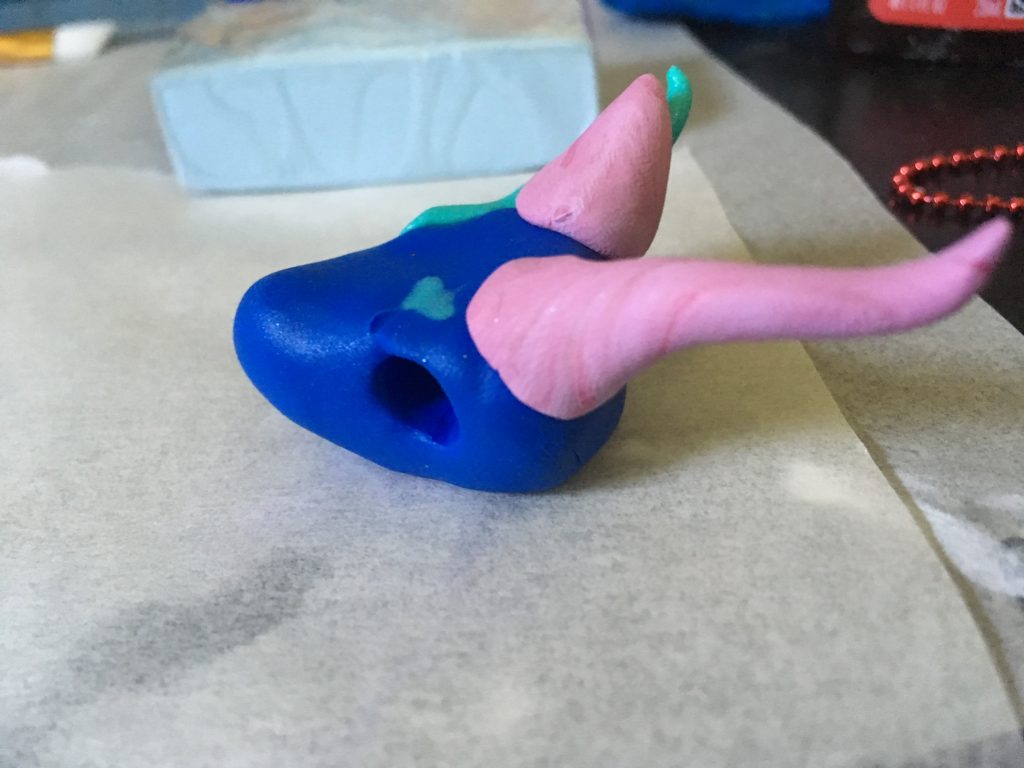 For the horns, I mixed some light purple and red together but not all the way mixed, and left them as nubby cones until I attached them to the head, then I rolled them between my fingers gently to make them long and curled the tip slightly. 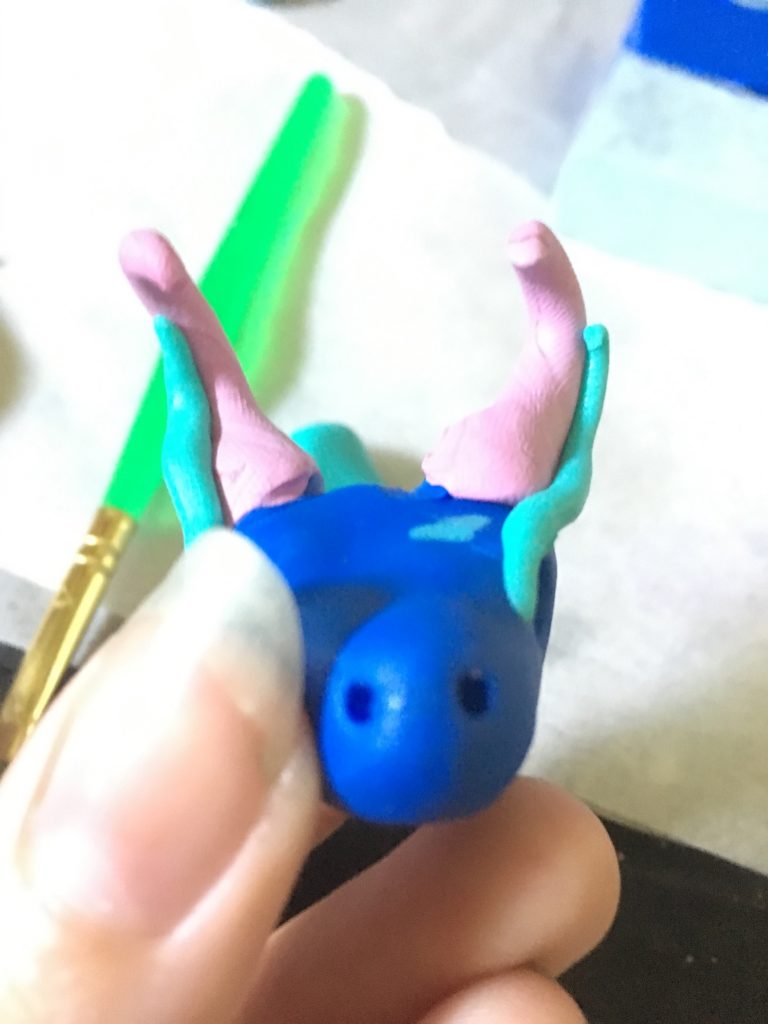 Normally you would do the eyeballs before eyebrows, but I decided “what the heck, I’ll do the eyebrows first”. Roll out a thin piece of clay about in inch and go over the eye and press it gently onto the horn, curling the tip slightly, away from the horn. Use a dotting tool to smooth it out around the eye socket so that you can easily pop the eyes in later. 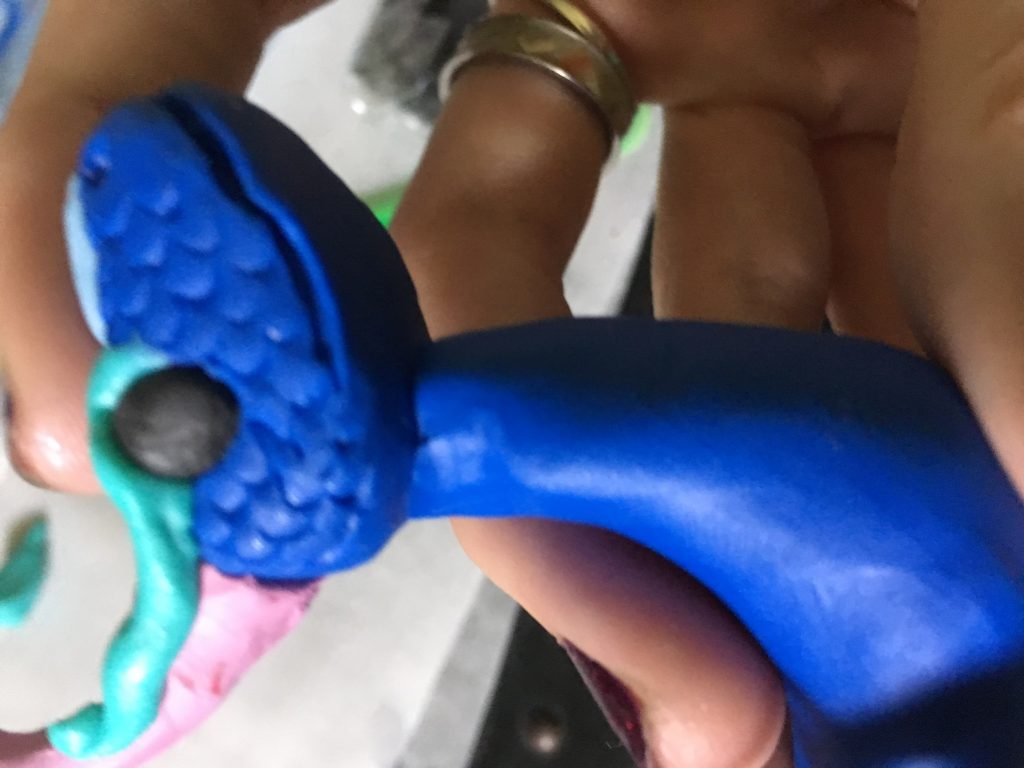 Using your dotting tool, start poking bits of black clay into the eye socket. With the wood carving tool, turn it upside down so that the bottom jaw is more carved out than the top and carve out a smile, starting in the middle between the nose holes and carving to one side, then doing the same for the other side. 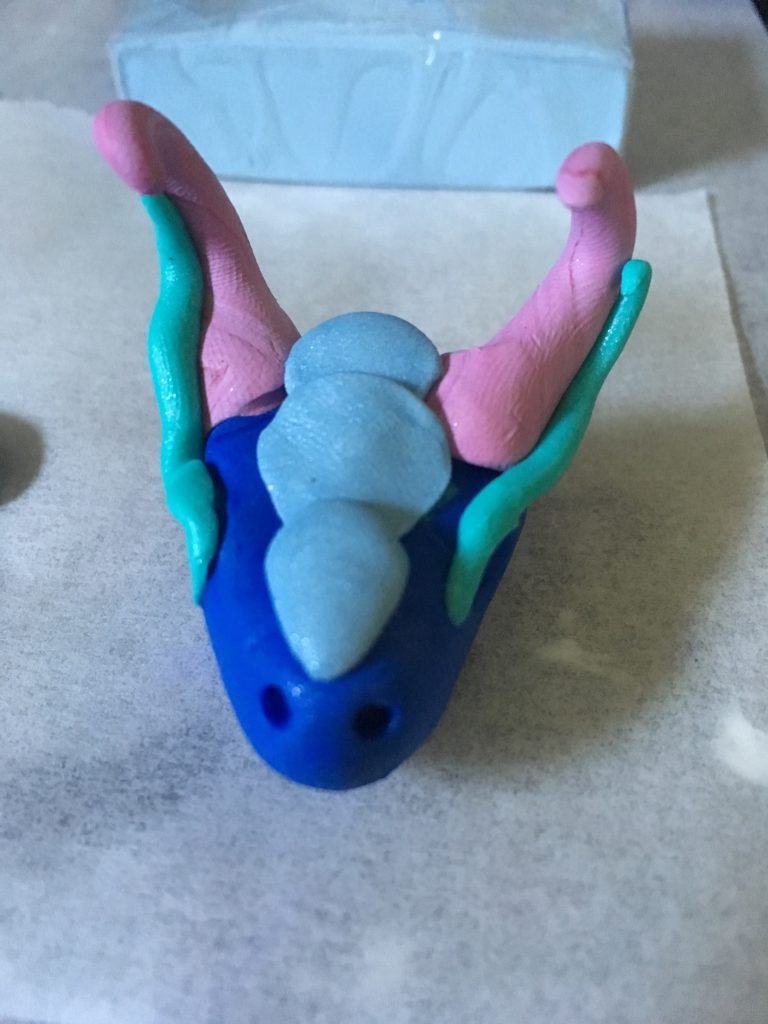 Step 7: Scales on the Face 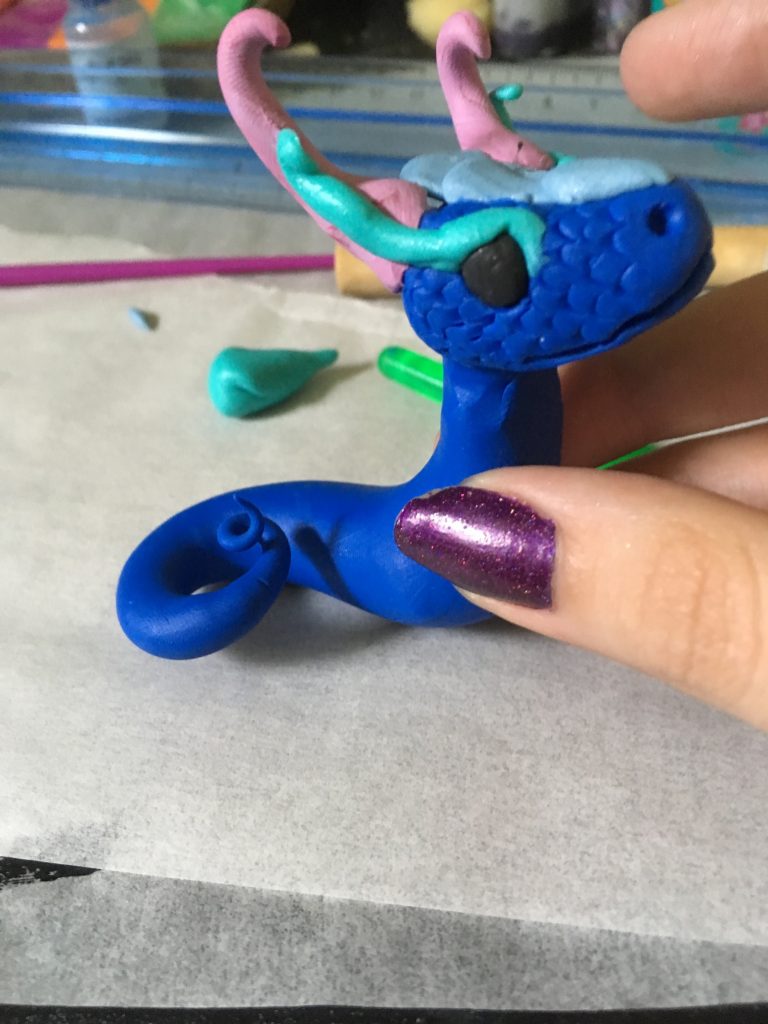 Using a large dotting tool or the rounded end of a paint brush, gently stab the bottom of the head so that it is on the paintbrush or dotting tool very securely. Using the wood carving tool, make scales by pressing it into the flesh of the snake gently at an angle, and do this all over the face except for the eyebrows, horns, eyes, and the light blue scales. 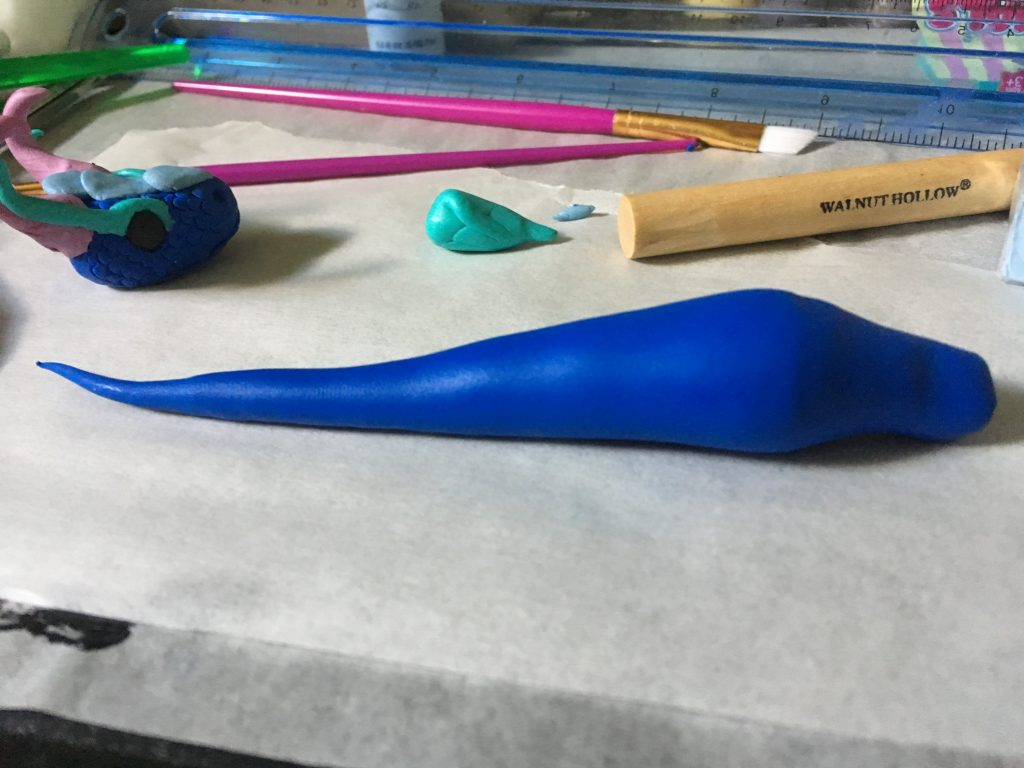 Knead the rest of the dark blue clay, and roll it out so that the tail is long and ends in a point, the belly is the widest part and the neck is thick enough to hold the weight of the head. 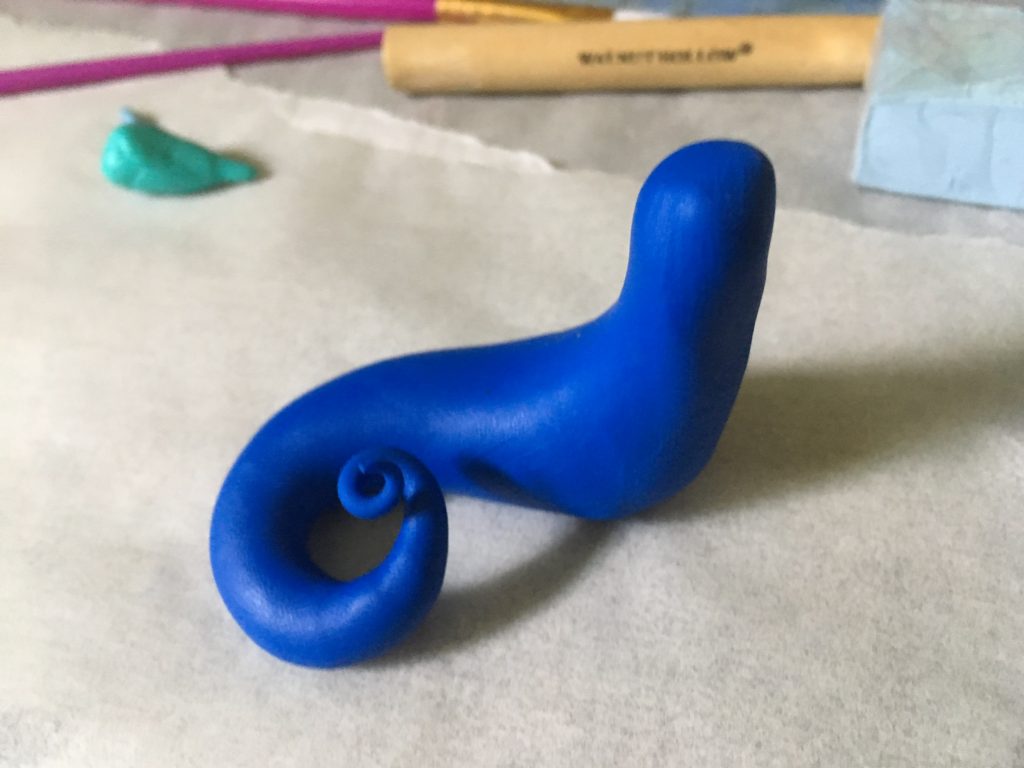 Curl the tail around for support and angle the neck straight up. Make sure the sharp end of the tail makes a cute little swirl, and can hold itself up.

Step 10: Attaching the Head to the Body 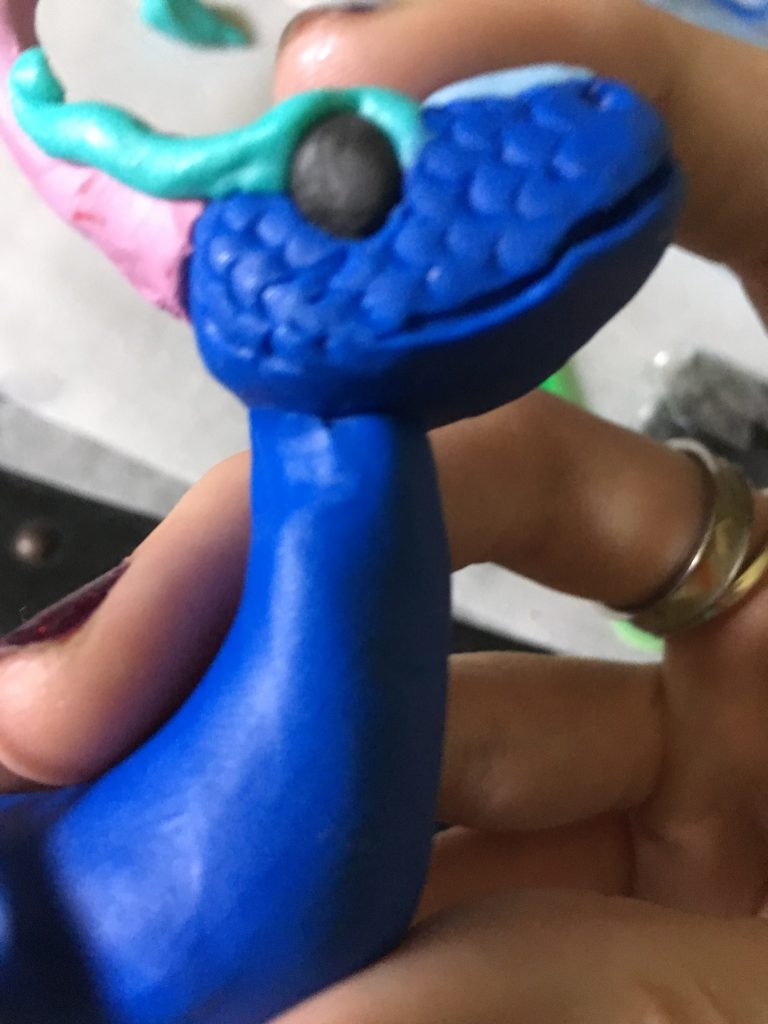 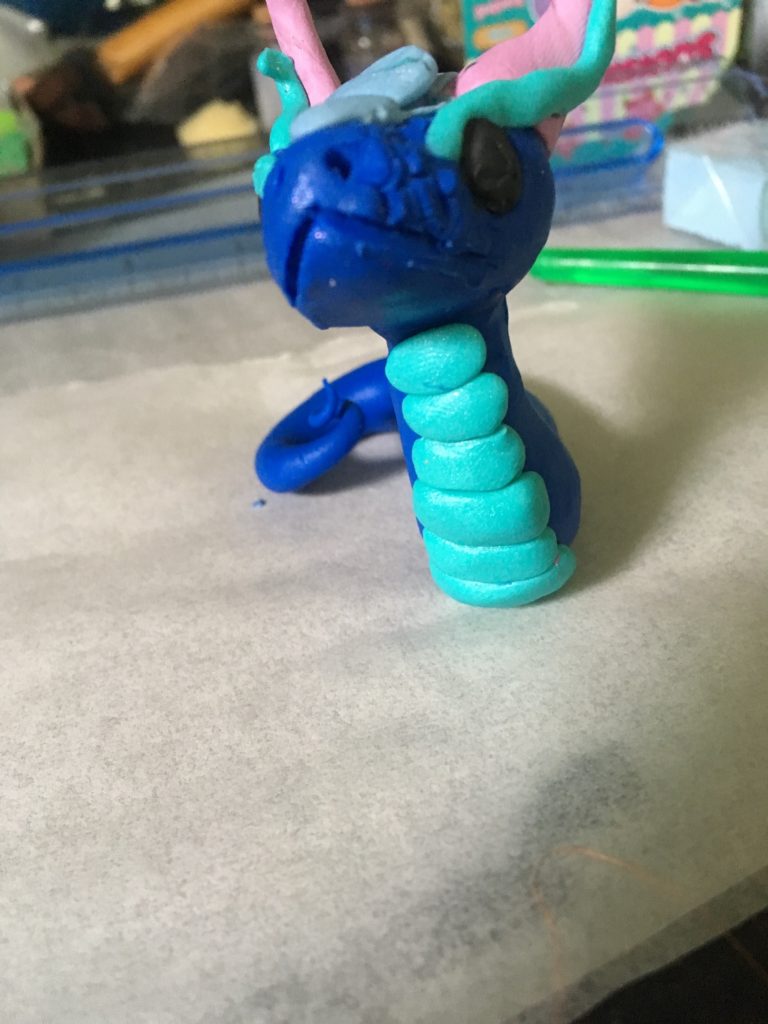 Using the same color used for the eyebrows, roll out thick little ovals of clay and press each one onto the underbelly, being careful to not knock the snake over. He was a little bit top heavy, so do be careful. The underbelly scales will help him stabilize a bit, if one of the scales is very close to the bottom so that it can rely on it for support.

So for this step, take the wood carving tool and starting at the base of the head, gently carve scales into the body, being extremely careful, and-…Oh. 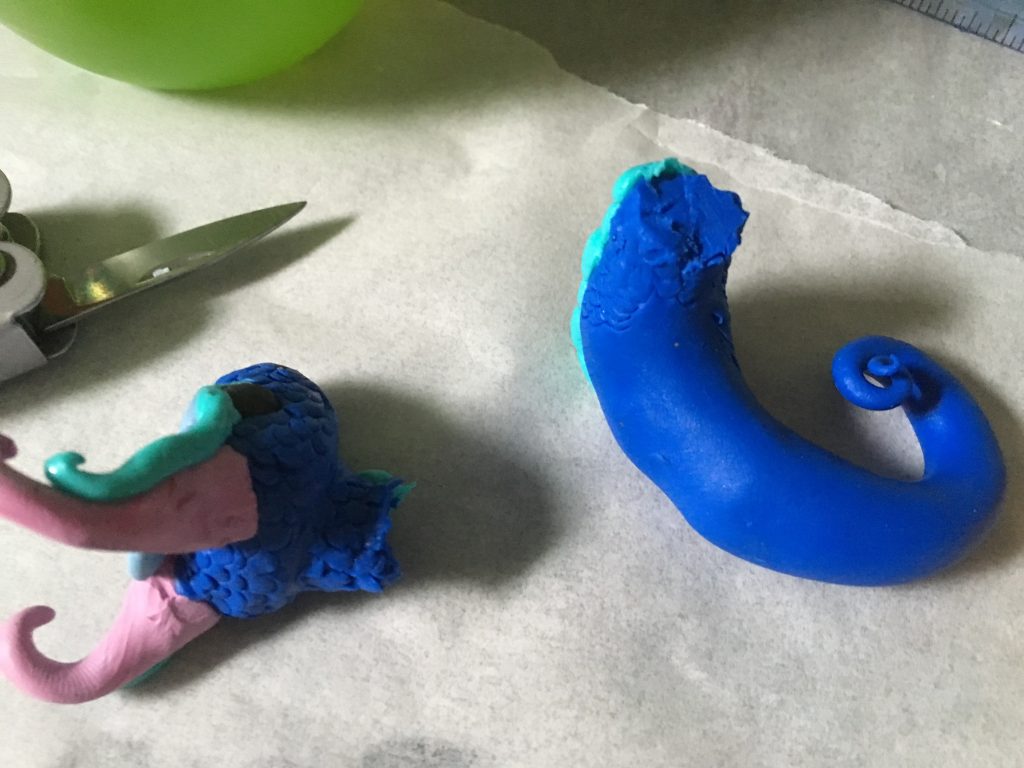 We can fix this. Finish scaling the body and use two pieces of wire, about an inch long, to reattach the head. 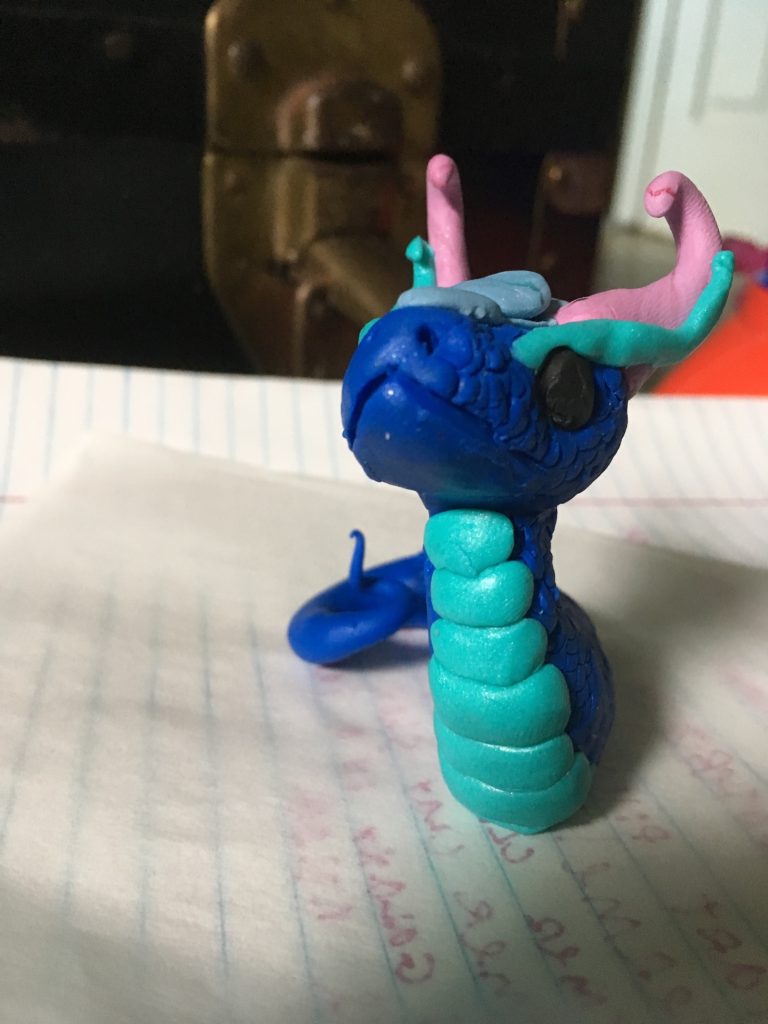 See? Add a few more scales and it all blends right in. Nobody has to ever know what happened.

Pop him in the oven at 275 for about half an hour, being very careful to make sure he does not fall over in the oven. 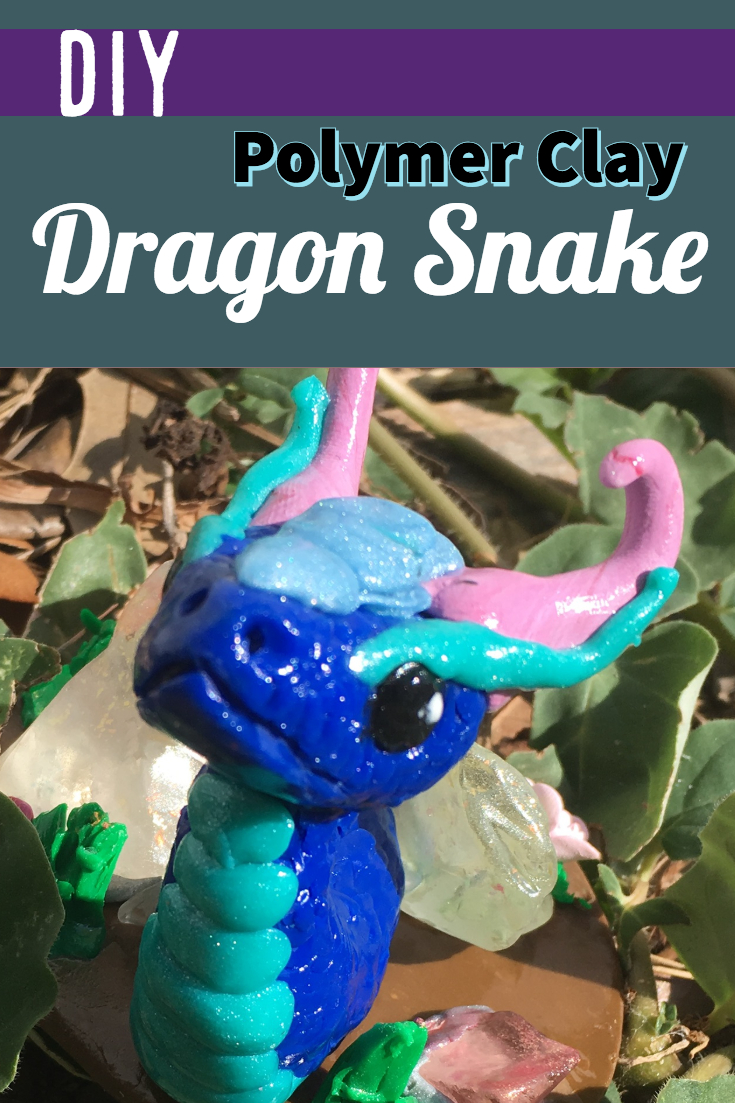 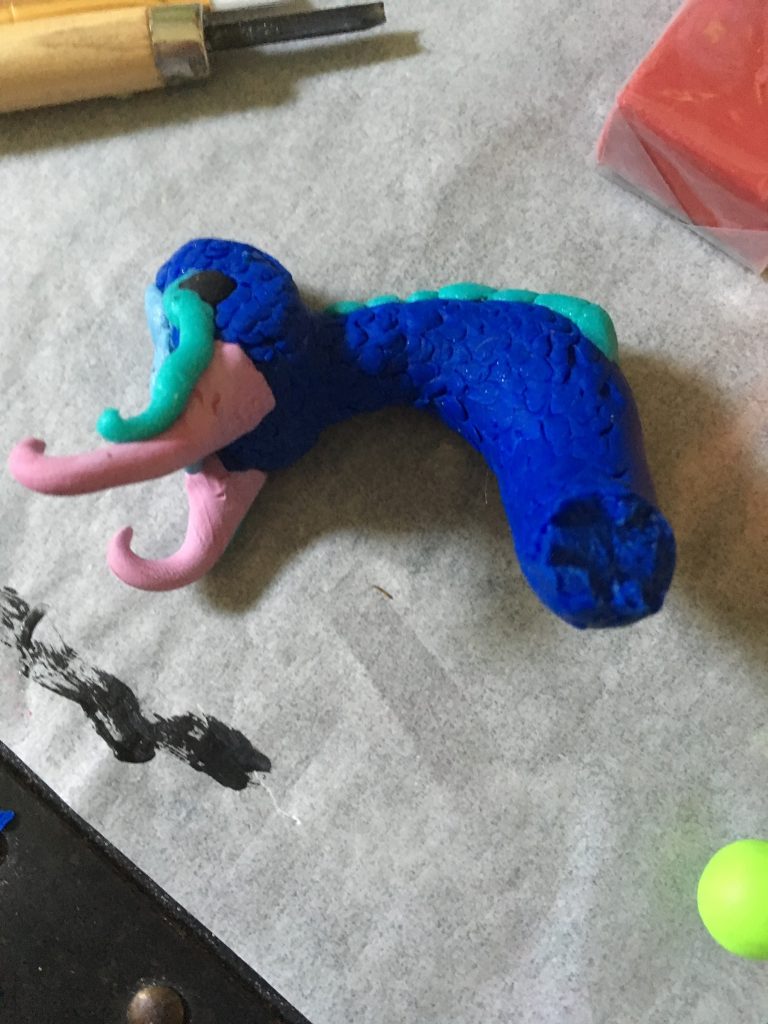 As the creation is pulled out, you realize he fell over when the oven door was shut and nobody noticed. In desperation to fix his posture, his tail breaks off and that two hours of sculpting is seemigly completely useless. But don’t worry, this can be fixed! Part two coming out next.