LOLbit is a fun but rare character. In sister location, he pops up on the screen on the secret night. He does pop up in other FNAF games, but I forgot which ones. Funtime LOLbit is basically a recolor of Funtime Foxy with a lovely hook. Here is how I drew him, and how you can draw him too. 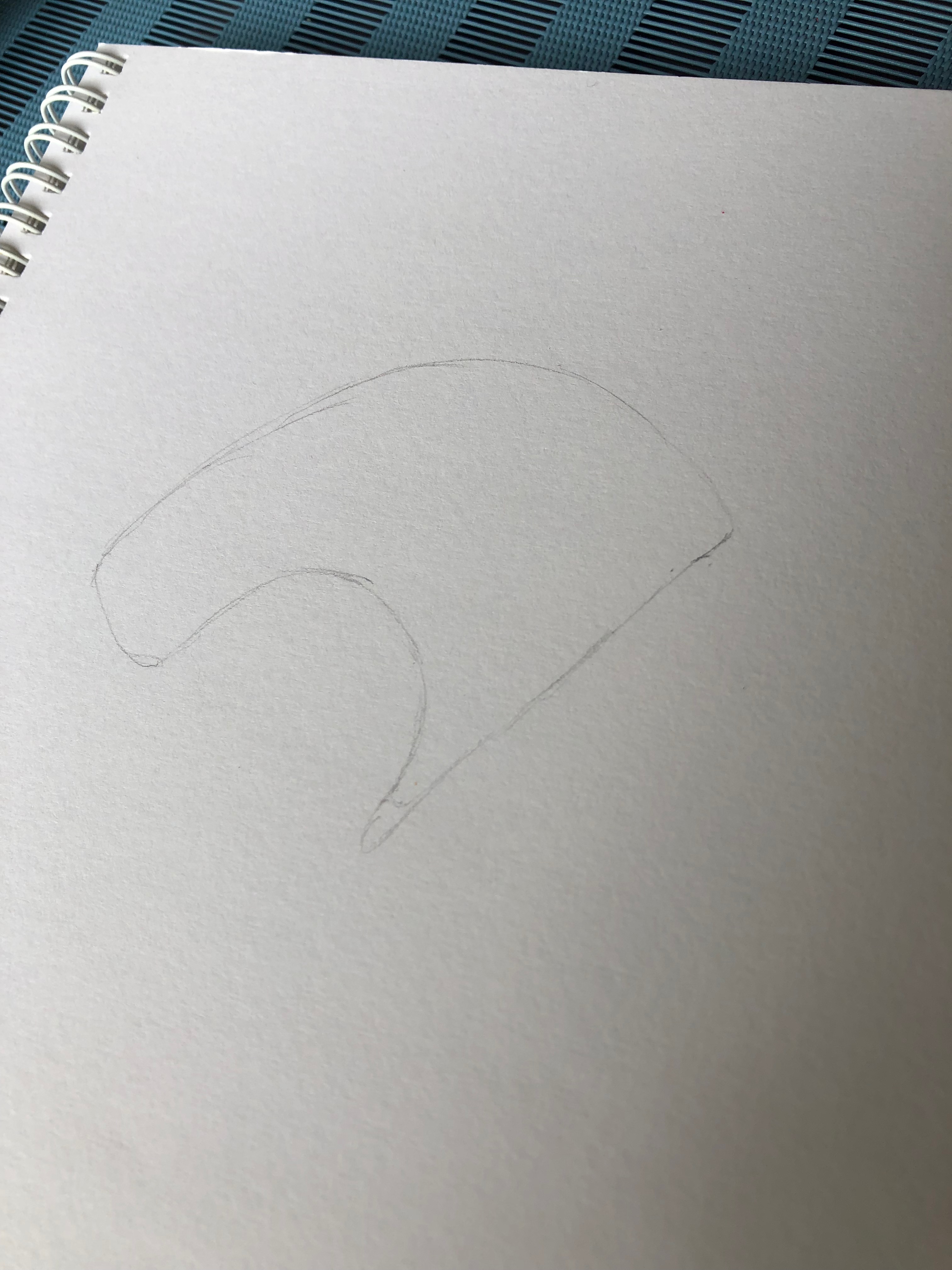 I started in a non traditional way. The proper way to draw a face is with a blank sort of oval shape with a vertical and horizontal line. However, in this case, I started by drawing the upper mask pieces. I did this by turning my paper and copying both halves of the face onto the paper, which is a sort of quarter circle shape with a half oval shaped cut out.

After drawing the first half, I added the tuft of hair. This was not only for scale, but also so I would know where the other half was going. I drew the other half slightly below the first half and a bit more to the side, since his face is split open and the pieces are apart. 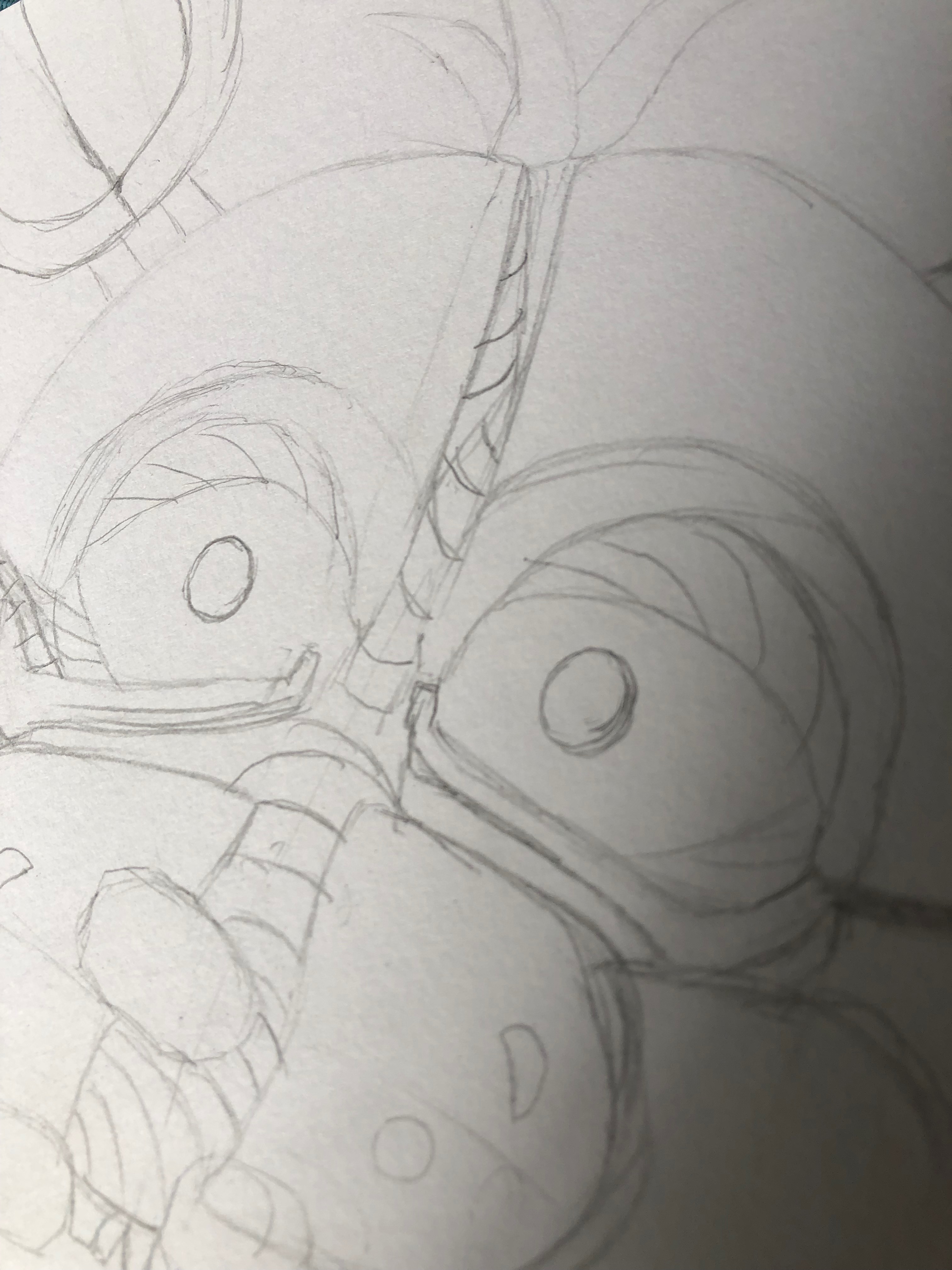 There are a lot of details on these halves, including the sort of orange eyeliner that goes around the eyes. Lightly sketch that onto the animatronic halves, making sure they look the same on both sides.

Adding the Eyes to the Funtime LOLbit 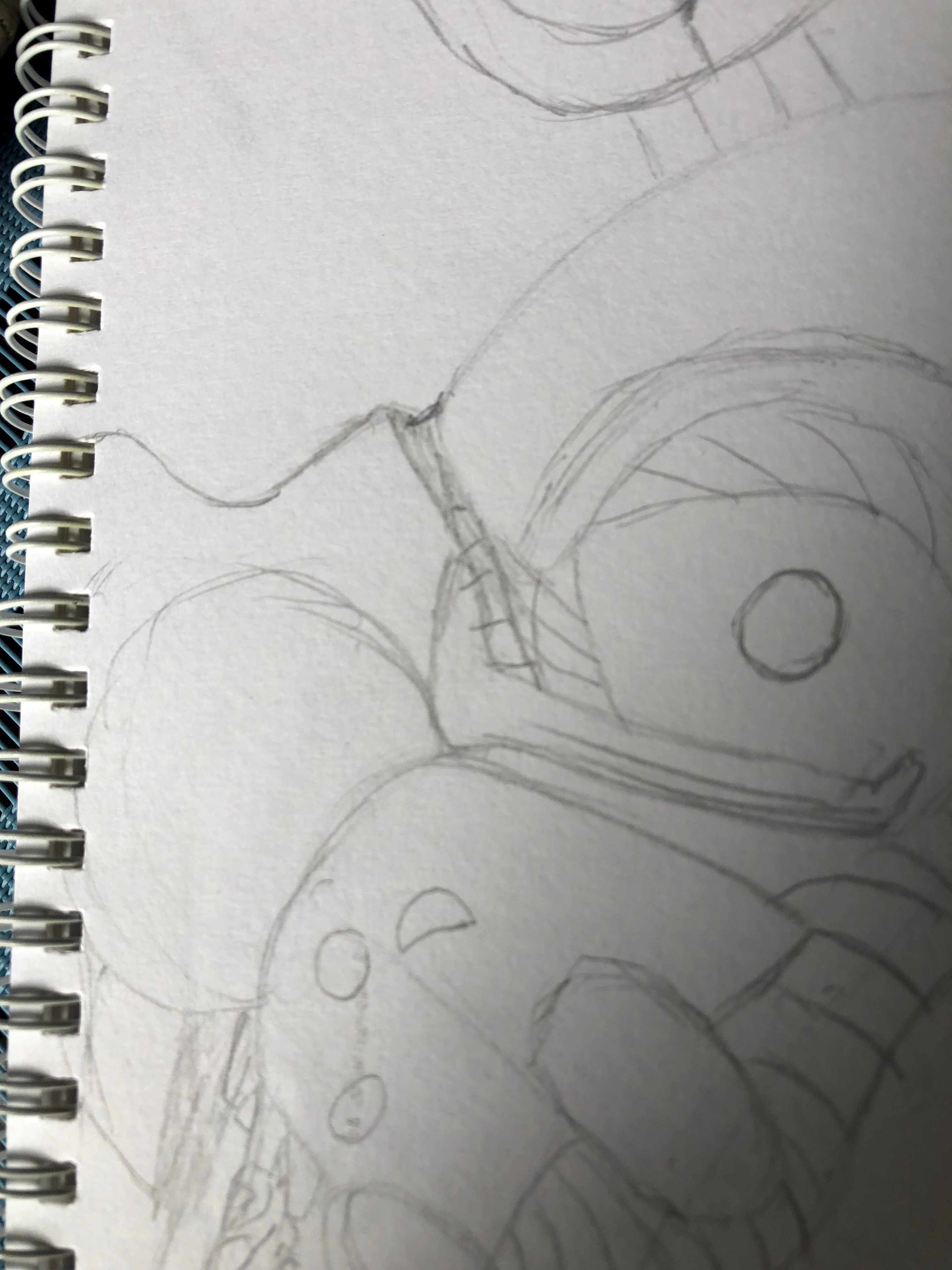 LOLbit has eye sockets just like everyone else. However, unlike everyone else, these eye sockets are animatronical, and the pupil is simply a glowing white spot. Draw the eyelids first by following the shape of the inside of the mask’s eyehole, making a sort of wirelike shapes. Do not make the wires end harshly at the line of the eyelid, instead make them curve down slightly to give the eyes more movement and life. Draw a little circle for the pupils and leave the eyes alone for now.

Sketching the Inside of the Face 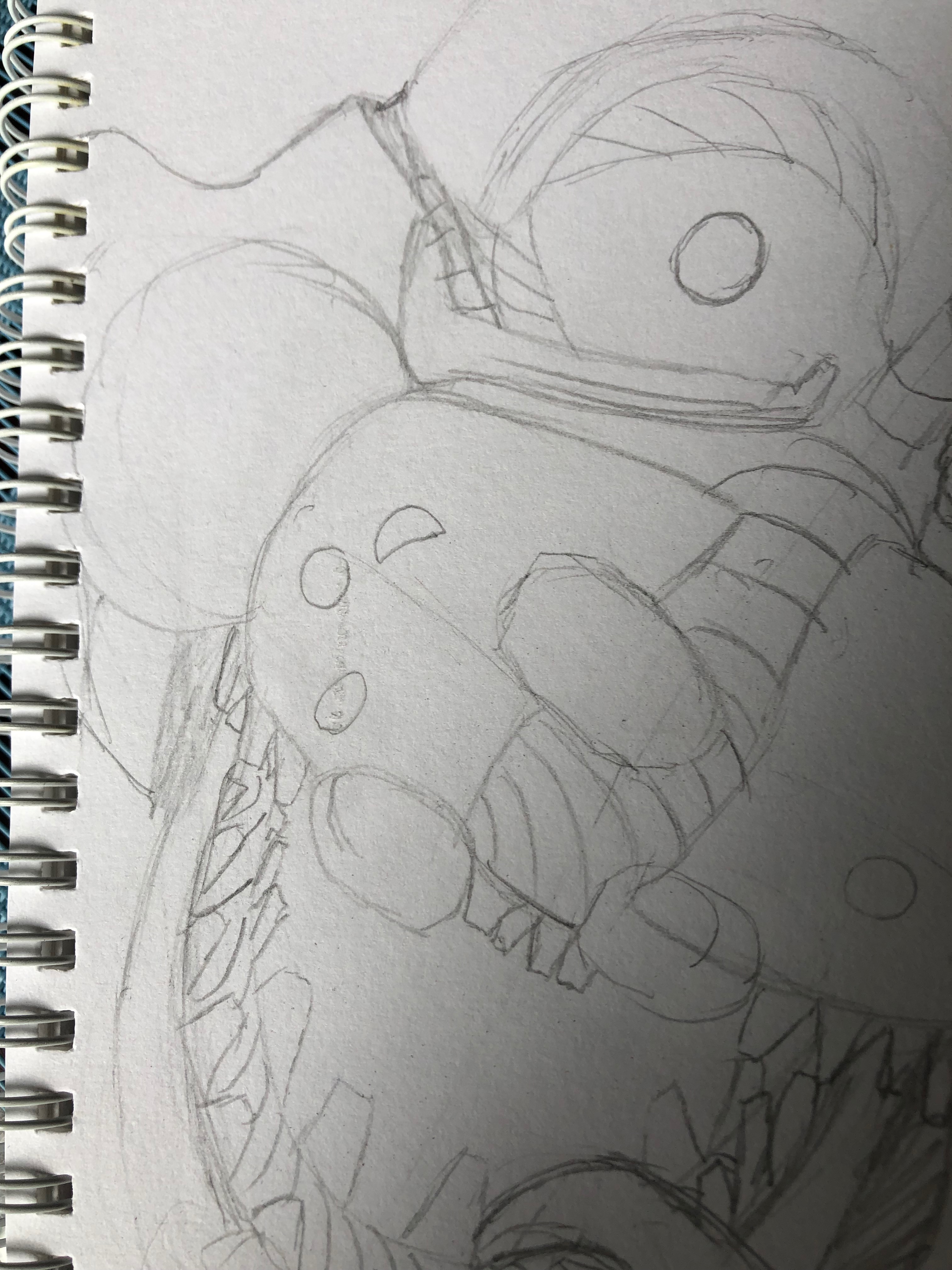 LOLbit has so many wires hanging out under his face. Sketch these like tubes or straws, giving them just a bit of movement by curving the lines slightly. Add lines to the wires by drawing slight curves, which will also define the wires and give them movement.  Darken these areas as you go, and fill in the general area between the mask with darkness between the wires.

The Lower Jaw of the FNAF Character 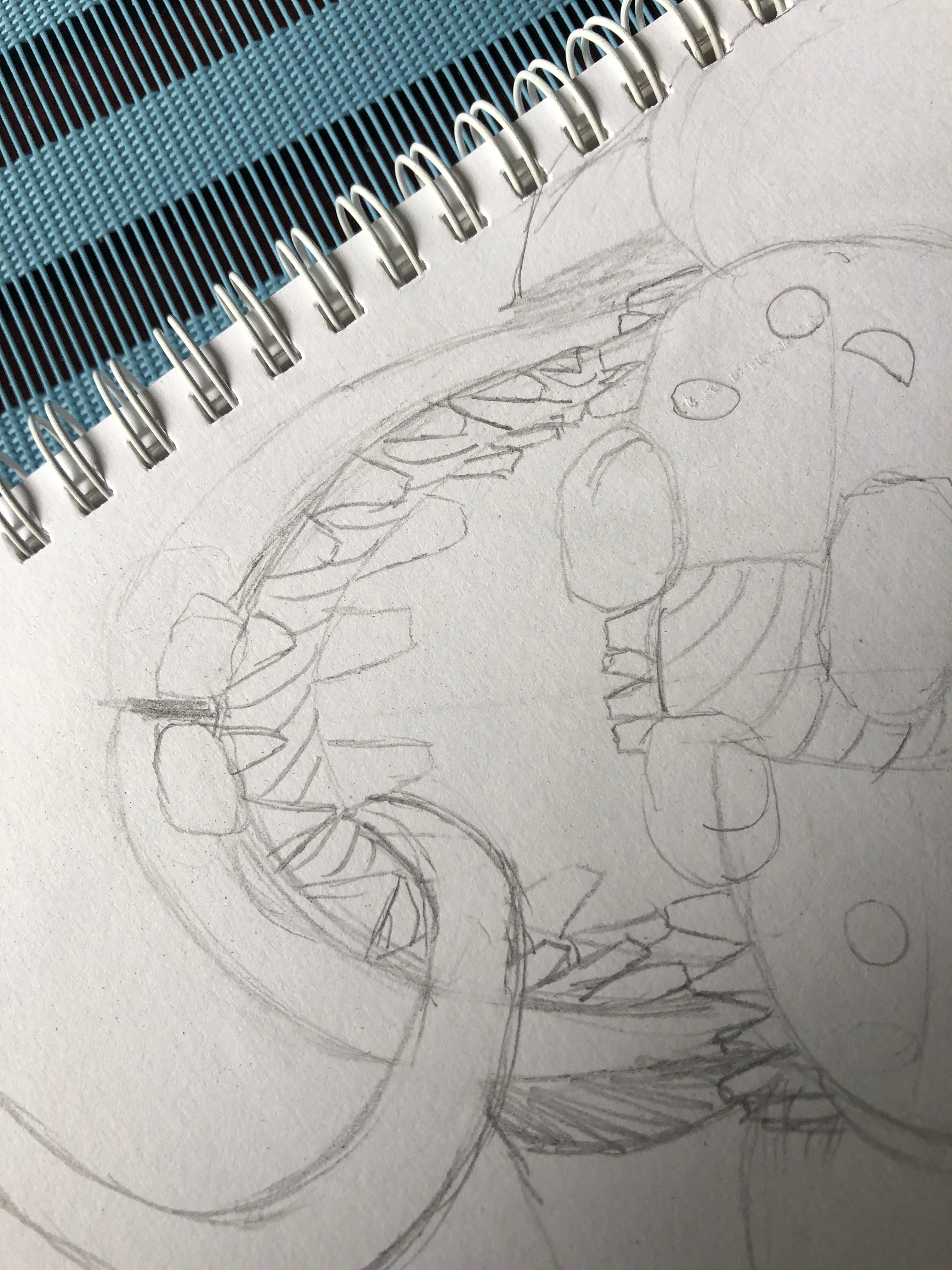 Draw the muzzle split open first, with the wires in the middle and the side panels with the fox fluff sticking out on either side. The side panels are basically rounded off triangles, and the muzzle is rounded quarter circles slightly apart, with an oval nose stuck to one half. Draw a lower jaw beneath the muzzle, attaching from under the cheeks and going down farther than you would think it should. Draw the inner jaw and the outer jaw, which should not be split open.

LOLbit has sharp teeth, but not cruel and pointy teeth. These teeth more or less look like the tips of fresh crayons, like how the crayon box looks when you open it? Draw that, but in a double row on the bottom and a single row on top. Draw more twisting wires on the inside jaw, or the gums, and shade it a little darker than the rest of the teeth and mouth.

The hook is really simple. Draw a half circle going off of the page, and draw a simple hook shape going into the mouth. Don’t overthink it, it’s not that complicated. Hooks are just the letter C with an extra stick coming off of it.

The big, rosy purple cheeks are located on either side of LOLbit’s face. Draw really big circles on each cheek and make a mental note to shade with a highlight on one side when you are finishing up.

LOLbit has two ears very much like Funtime foxy. Draw two tear drop shapes about half an inch from the head and add the little metal pieces that hold it onto the head. Don’t forget to draw the split down the middle and darken around that middle divider to make it seem more separate.

Draw some little oval rectangular shapes onto the front of the muzzle. There should be four divided pieces of lipstick, one for each side of the face. 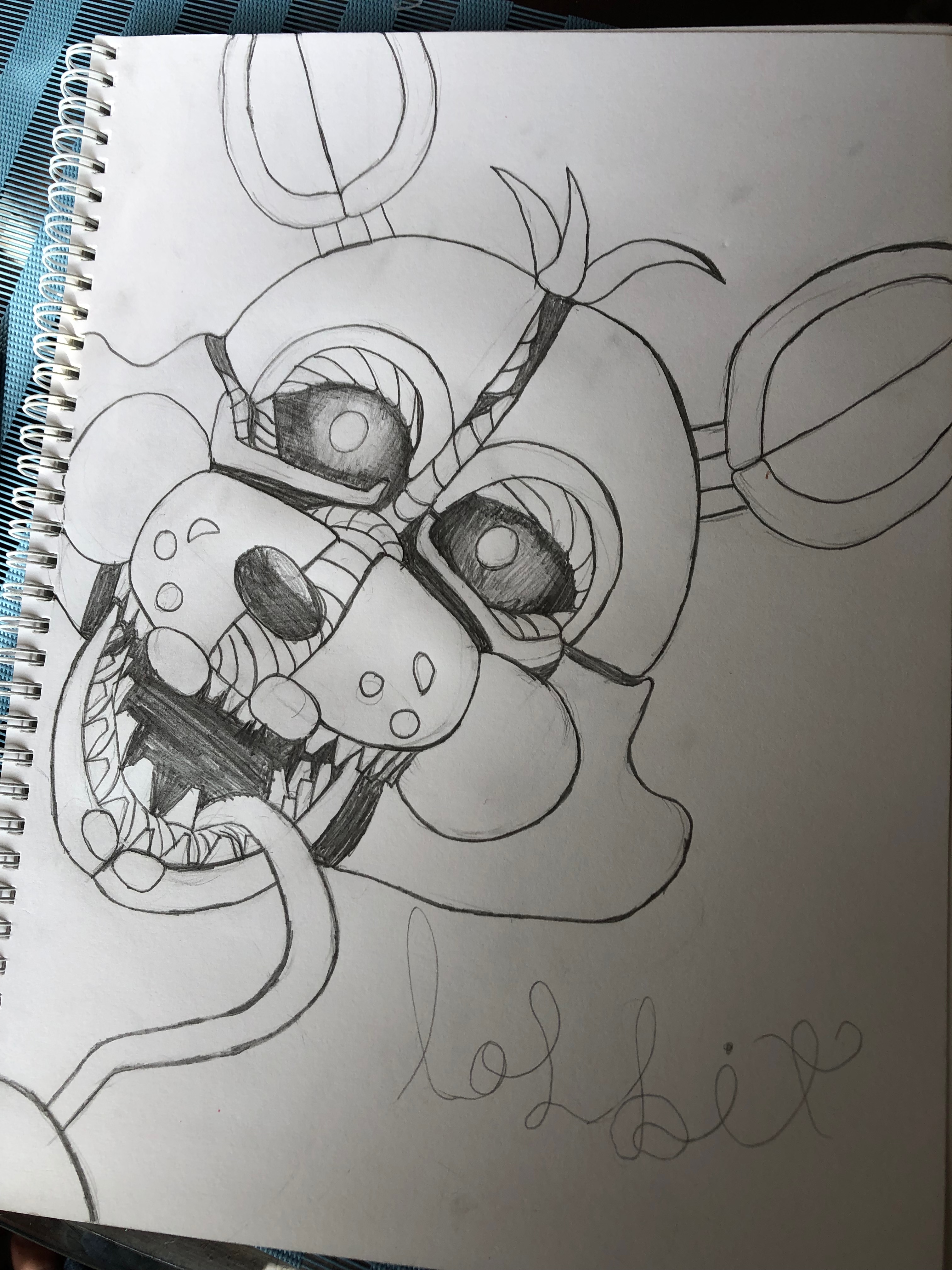 Press down harder and draw over the main lines. This will make your art look better because the mistakes will be shouted over by the straight pretty lines you chose to darken instead. Once this is done, use a dirty blending stick to rub in little bits of shadows in places like under the cheek, and fill in the eyes. Blend the white into the darkness, to make the eyes appear to glow. 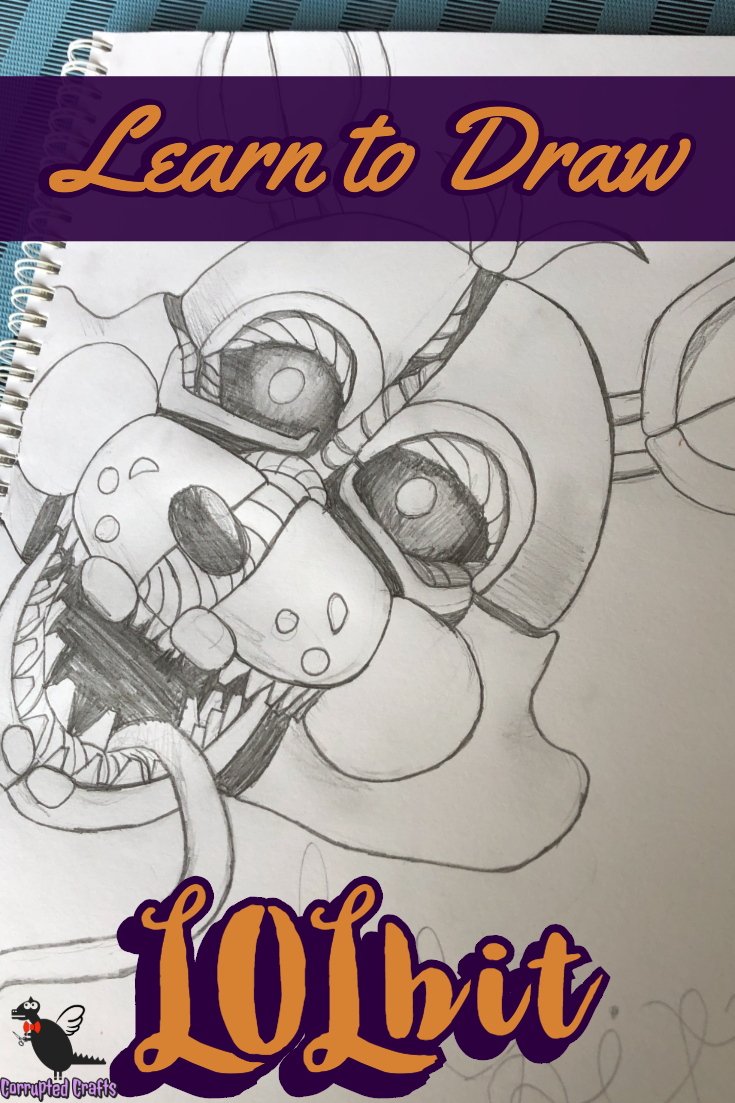 You now have a really creepy Halloween poster. Happy Crafting! If you enjoyed this post, you may also like my Phone Guy Head I made from cardboard almost a year ago.