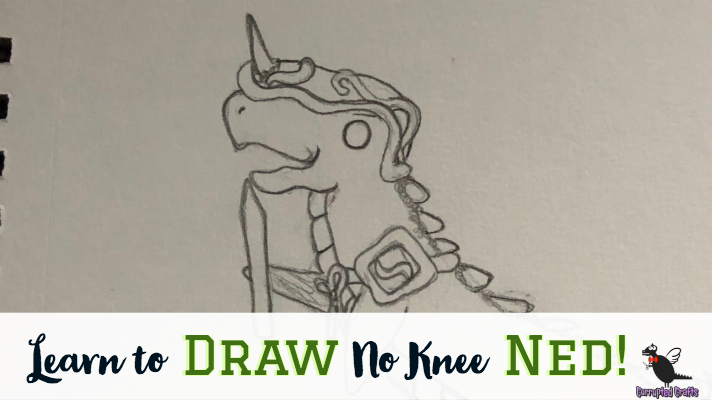 This lovely and tiny dinosaur is special—for he has no knees. This tiny child is only about an inch tall in the real world, and a mighty and fearsome general. He fought in the unkneeded war, against the two-kneed centipedes, and lead his troops to victory. Today we will be drawing just his basic form, using only pencil.

Starting No Knee Ned with his Back Leg 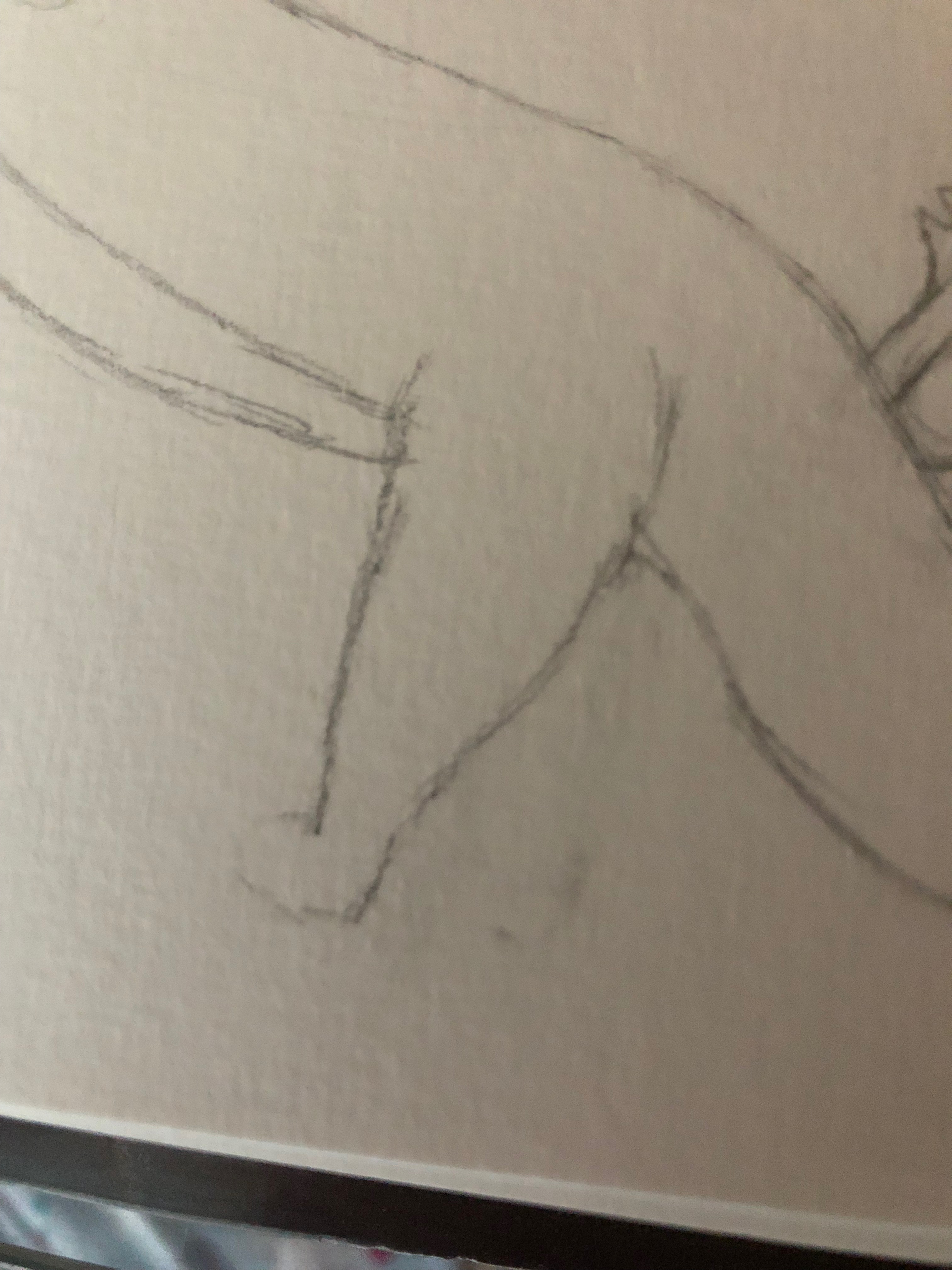 I’m not sure why, but for some reason I felt that Ned needed to be drawn from the back to his front. I drew a very simple and cutsey leg with a little nub of a paw on the end to hold his weight. Remember it doesn’t have to be detailed, he has no knees. 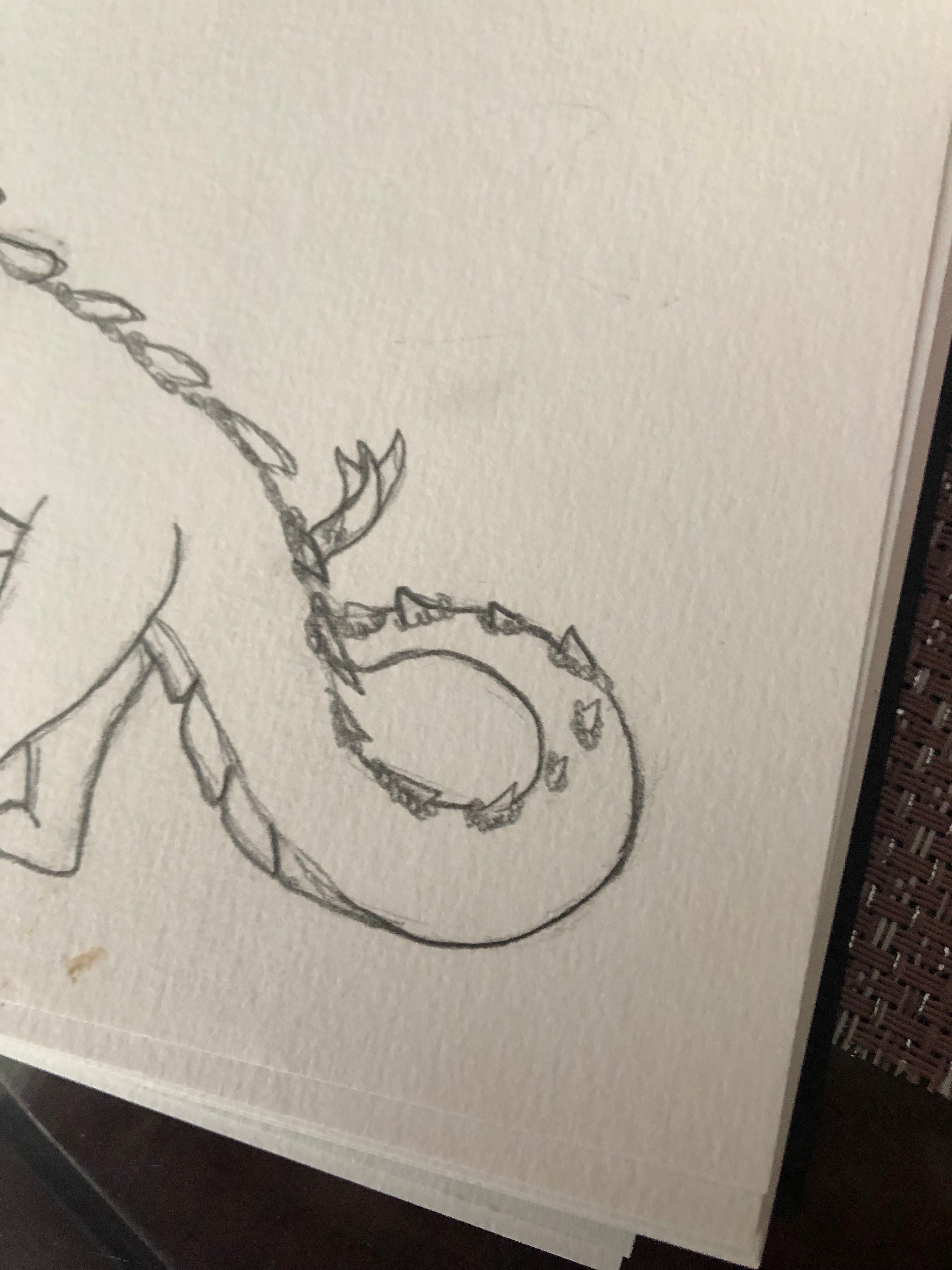 The original sculpture has a long tail, but this is hard to show off straight out and makes your figure look like it has no movement. Instead, draw the tail coming out and curve it up and back down to give the illusion of being longer than it really is. One common mistake to make here would be to make the curve of the tip of the tail line up perfectly against the body or base of the tail. Don’t do that. Either draw the tip slightly over the body or slightly behind the body to prevent the lines looking funky. 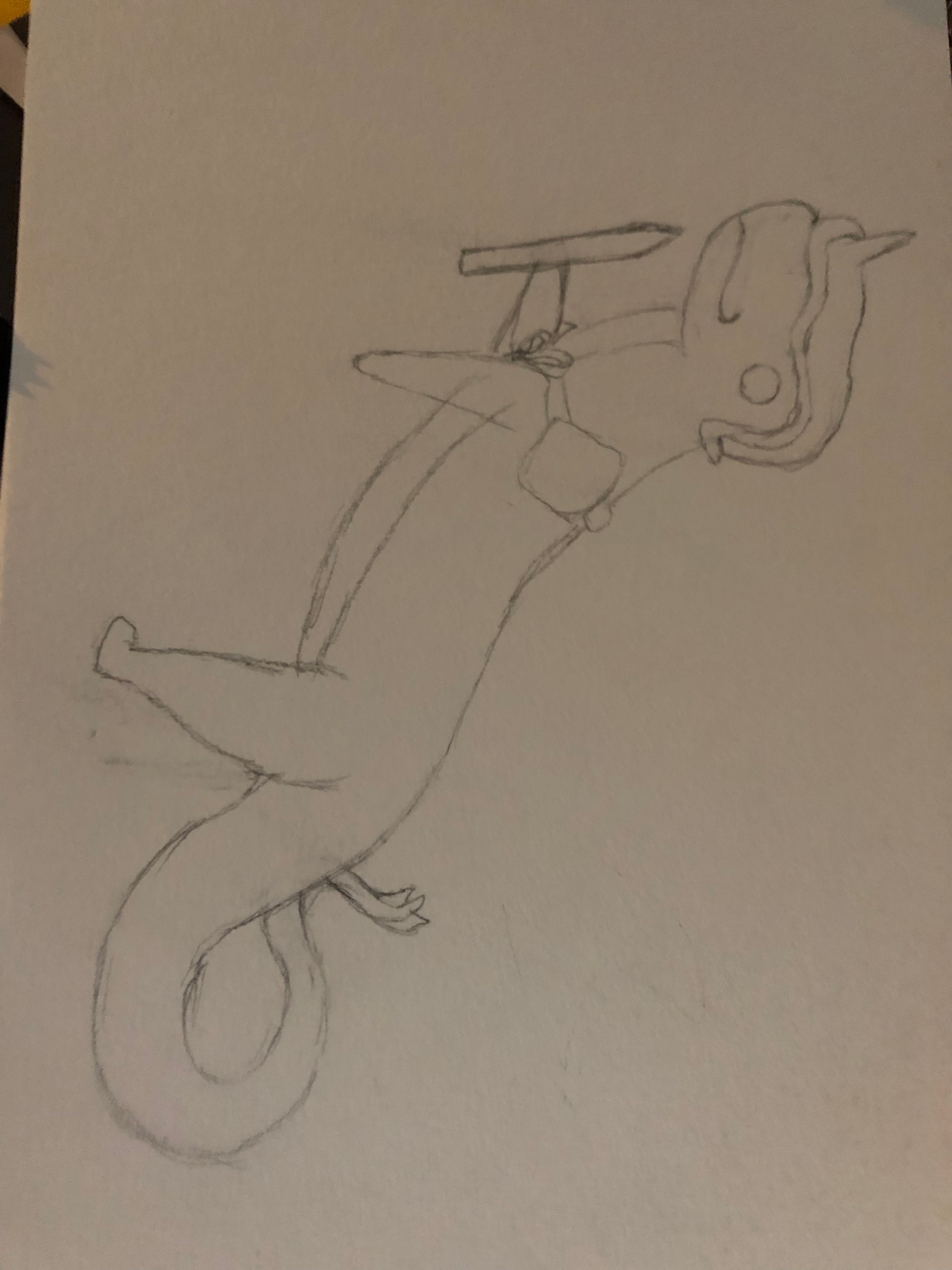 He is a long and thin little tinysaur, with obvious movement issues. You can draw him going up like he is standing up on his hind legs by making the drawing thicker and more at an upwards slant. Remember to mark roughly about where his underbelly will be.

Sketching the head of the Cute Dinosaur Drawing 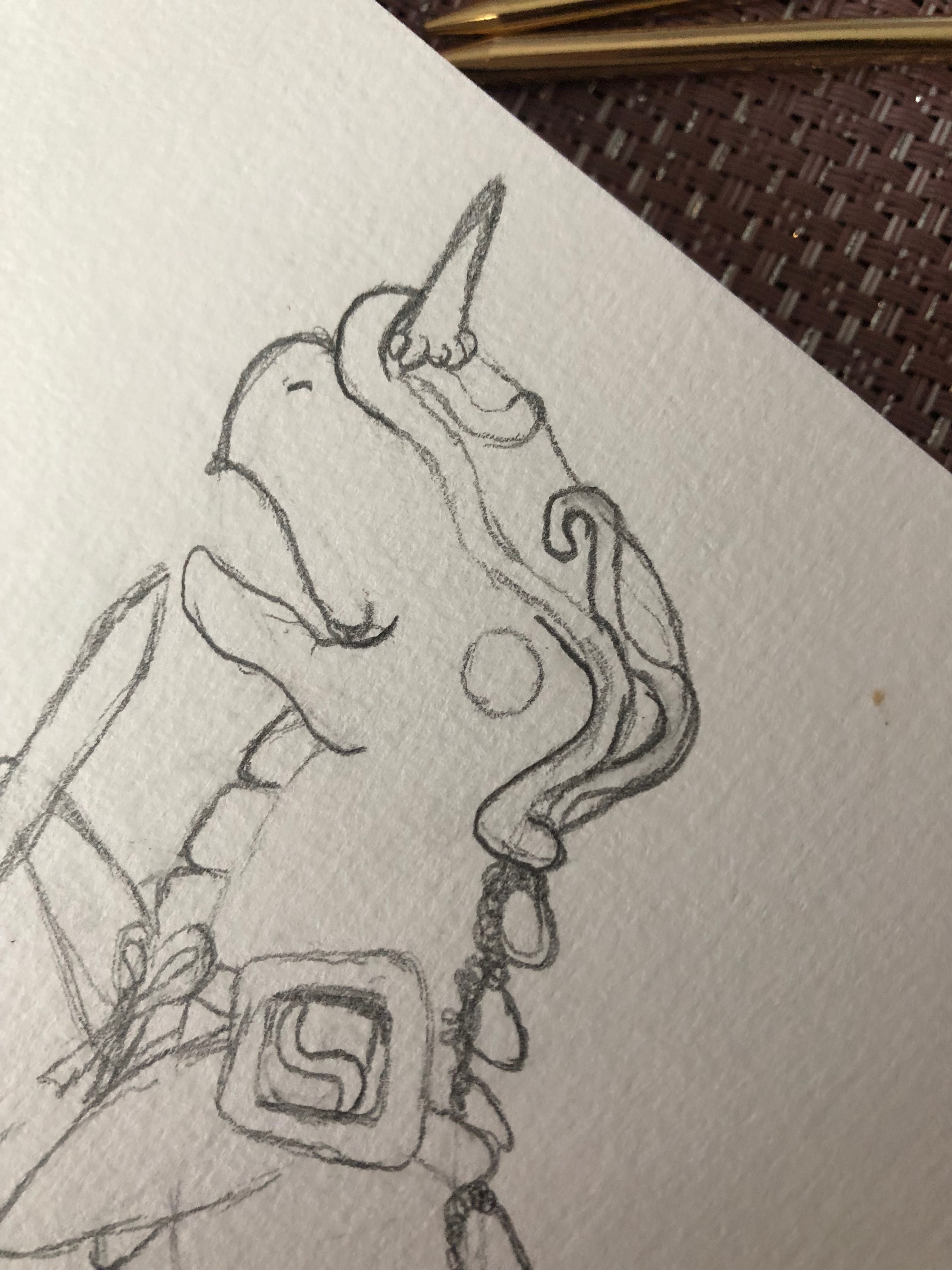 His head is very thick, round, and potato-like in nature. Draw a nice oval, then cut a little and add a little at the top of the head. I chose to make him with his mouth open by drawing a little sort of floppy squiggly line and making that into a jaw, then drawing the top jaw to match the lower jaw. Make sure the upper jaw appears like it will overlap the lower jaw by making the lower jaw smaller.

Drawing the Front Arm of the Cute Dinosaur Drawing

The front arm is super easy. Just draw a little nubby arm sticking out from his body in a squishy triangle shape. He doesn’t have elbows, either. 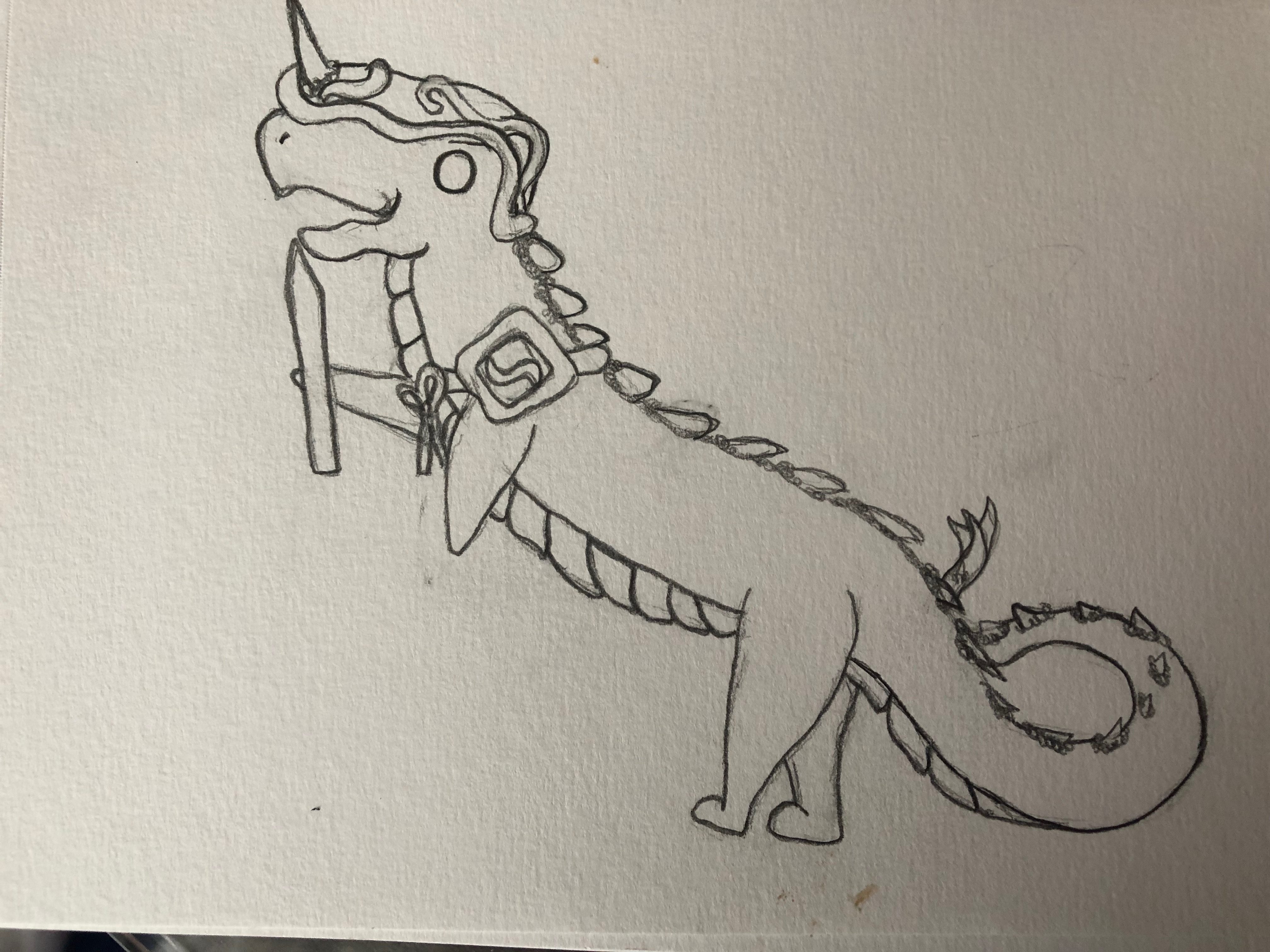 The tail spikes are also super easy. Draw two little triangles on the tip of the tail to make it sort of pointy and perhaps slightly menacing.

Adding the Small Armor to the Cute Dinosaur Drawing

Draw a small rough looking diamond shape on his shoulder area and draw an inside boarder to the armor. I chose to add little ties to hold it onto his body, since obviously he couldn’t glue them to himself. I added a little sideways “S” to the shield, which stands for smol.

The helmet is a raised up ledge around the head that starts sort of on the muzzle and curves around the eye area. I added puffy squiggles and a unicorn horn to really make him tough and armored.

Adding the Spear to the Cute Dinosaur Drawing

This little silly friend has a spear he made from sharpening a little tiny stick against a rock. You’d think he would use this weapon as, you know, an actual spear, but he isn’t too bright. He uses it as a little club instead. Draw a toothpick in front of him, and another little Patrick Star arm to hold it up.

Drawing the Other Back Leg

After awhile of debating, I decided he needed a fourth leg. Draw the second back leg on the back side of the other leg, to make it look like two separate legs and not a uni-leg.

Add the tiniest little nostril and a plain round eye. You can fill it in if you want, but I felt he looked less focused and more derpy with a white eye.

Start to clean up your drawing. Make notches in the underbelly, add small texture to the body, sparkles to the eyes, anything you can think of to make him even better.

Adding Back Spikes to the Cute Dinosaur Drawing

Add small rounded bumps going all the way down his back to the tip of his tail. Make little round squiggly lines around each spike to make them seem like they grew out of his back and make him more detailed.

Go around all your lines and darken them. This will really make your drawing look good. Darkening the lines helps you clean up any mistakes you made along the way. Draw a shadow under his body, and make sure to make under the tail and under the feet darker than anywhere else because they are closest to the ground. 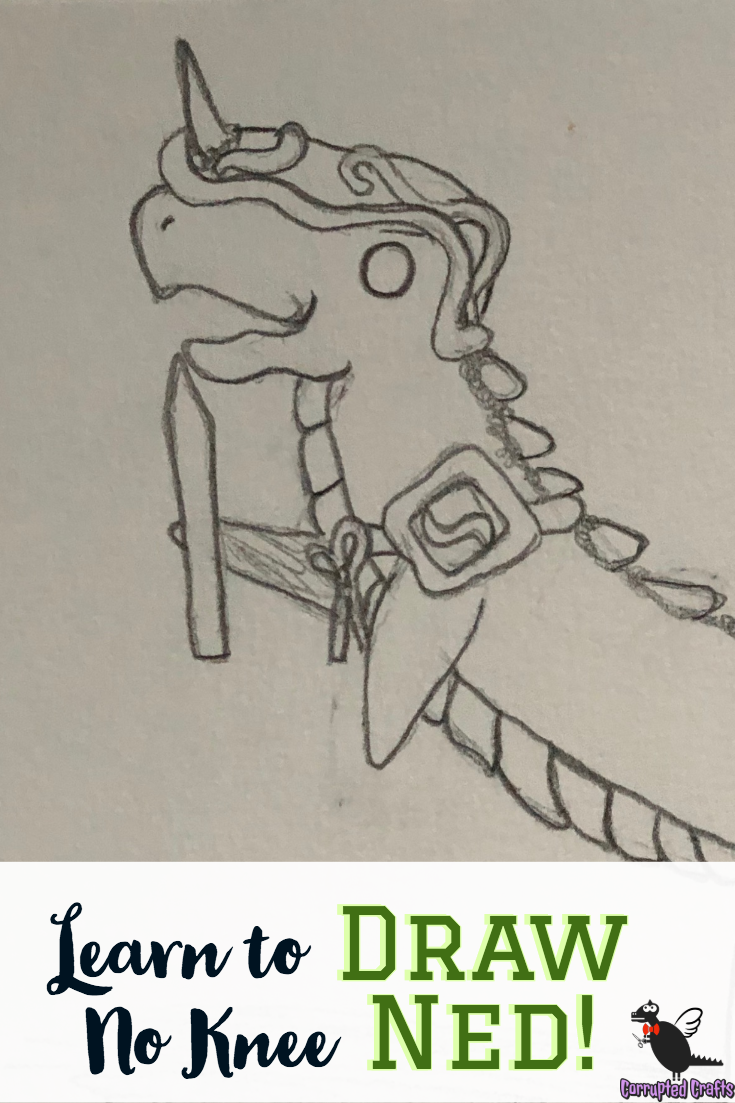 Horray! Little No Knee Ned will forever be remembered in both our hearts and our sketchbooks. Happy Crafting!